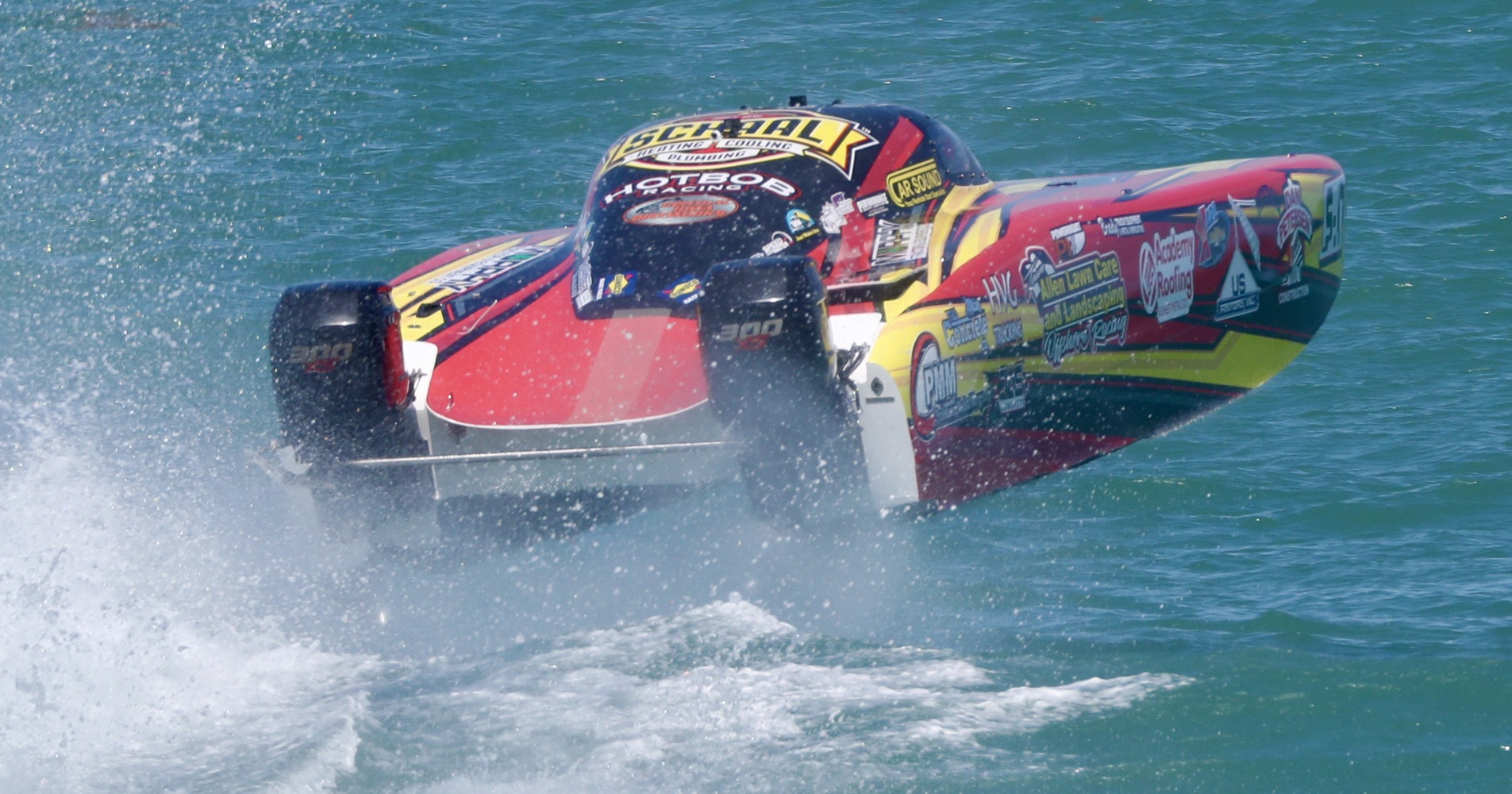 By the time the Super Stock-class race was finished, this was the view enjoyed by Team Allen Lawn Care and Landscaping’s competitors 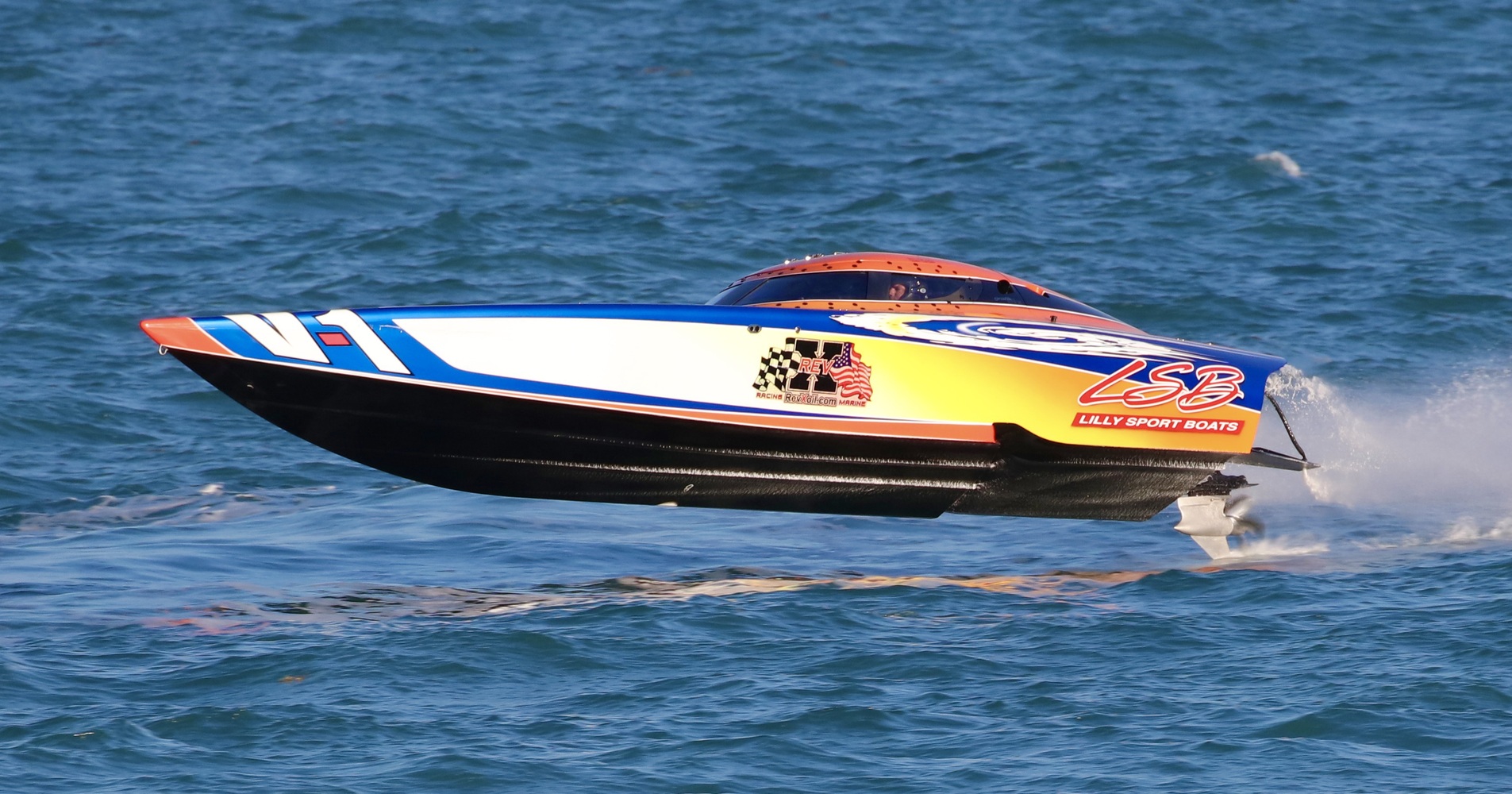 With first- and second-place finishes in the Mod and Stock V classes, Brit Lilly and Kevin Smith had a successful day in Cocoa Beach. 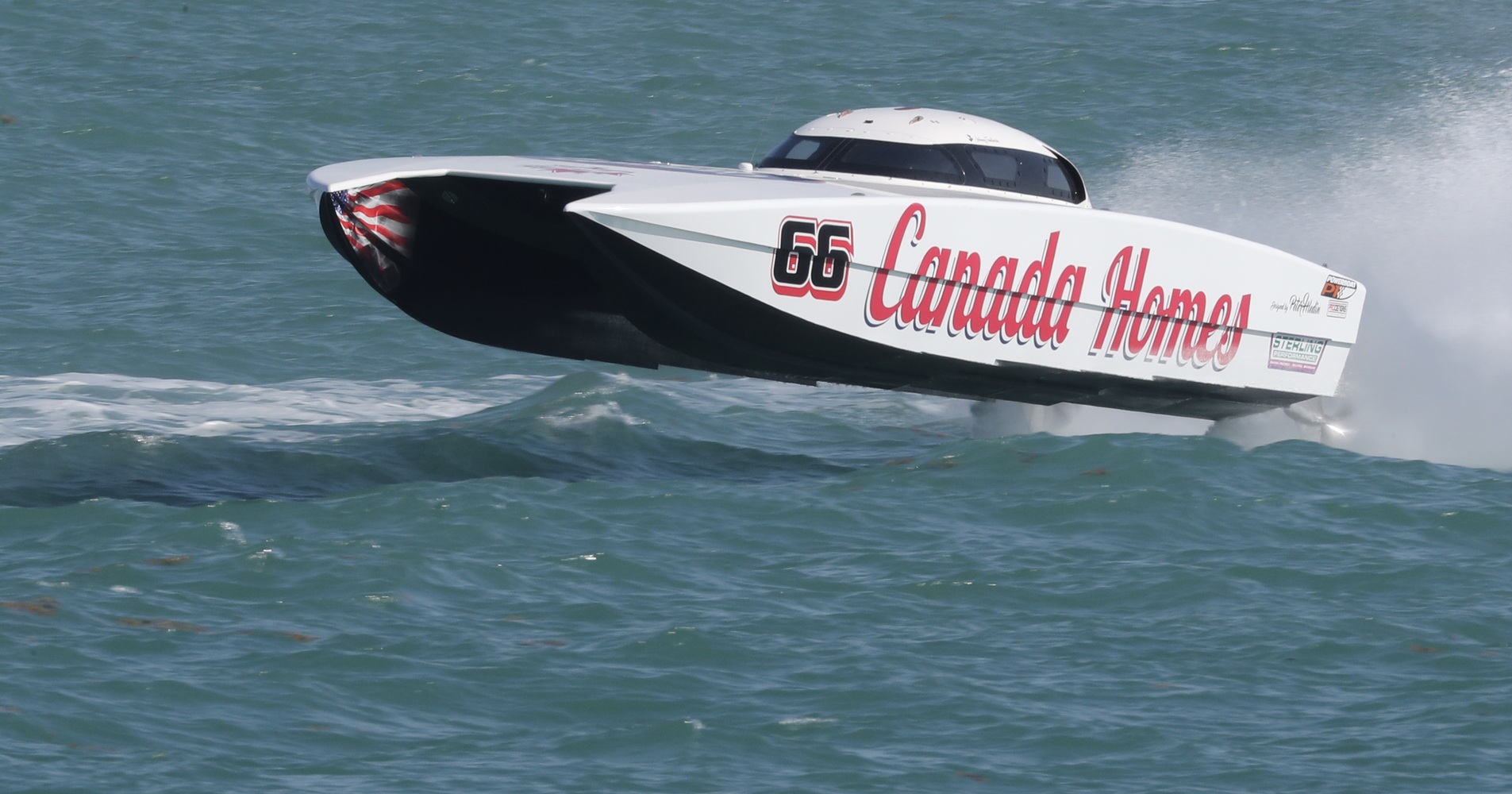 An article from Speed on the Water's man on the scene at Cocoa Beach, Coleman McGowan


Written by Coleman McGowan Speed on the Water

It’ll go straight to Performance Boat Center for the fiberglass work. We need to have it ready for Sarasota in a few weeks.
Loren Peters
LPC Racing

As local Cocoa Beach, Fla., event organizer Kevin Pruitt noted during yesterday’s driver’s briefing, getting Thunder On Cocoa Beach — the first race in the American Power Boat Association Offshore National Championship Series — to happen wasn’t easy. The show had to go on, he explained, despite all the organizational hurdles involved in putting on a race amidst a receding pandemic and difficult economic realities for municipalities.

By the time the Super Stock-class race was finished, this was the view enjoyed by Team Allen Lawn Care and Landscaping’s competitors.

Yesterday’s rough-water contest, reportedly with consistent three- to four-footers with the occasional five-footer in the mix, delivered enough action to make it all worthwhile.

In the Mod V class, a close three-way battle ensued from the green flag down to the first turn between the Tug It, Sheriff Lobo and Punisher teams. Piloted by Brit Lilly and Kevin Smith, Tug It quickly gained an early lead, while Sheriff Lobo hooked slightly at the exit of the first turn and retired shortly thereafter. The longtime father-and-son team of Sarasota, Fla.-based Steve and Stephen Kildahl in Boatfloater/Scott Free Racing took over second place from Punisher, which appeared to have mechanical issues and never challenged again for the lead.

As the white flag signalling the final lap raised, Tug It came to a sudden stop at the start/finish line. The cause, according to Lilly, was a broken stud off the carburettor. After a quick inspection and adjustment on the course, Lilly and Smith rejoined the race and moved into second place The Kildahls cruised to victory in their 30-foot Extreme hull, giving them the championship points lead going into their hometown race in Sarasota next month.

A better result awaited Lilly and Smith later in the day in the Stock V class, where Lilly debuted his new 30-foot Extreme LSB raceboat built entirely in-house by the talented team owner at Lilly Sport Boats in Arnold, Md. After a compelling battle with Tiki Lee’s/Fast Boys Racing, they claimed a lead they would not relinquish. NMB RV Resort finished second and Tiki Lee’s/ Fast Boys Racing took third.

The ultra-competitive Super Stock class saw 10 teams take the green flag and a multi-lap battle among LPC, YourStorageUnits and Team Allen Lawn Care and Landscaping. Shaun Torrente and Eric Belisle dropped out after the first lap with a mechanical issue in their CMR-backed 32-foot Doug Wright catamaran. The Jackhammer team cockpit duo of owner/driver Reese Langheim and Ricky Maldonado set a strong pace early, before dropping out of the race on lap No. 2 with a tall roostertail signalling likely gearcase-related gremlins.

“It’ll go straight to Performance Boat Center for the fiberglass work,” Peters said. “We need to have it ready for Sarasota in a few weeks.”

On the second to last lap, YourStorageUnits — another 32-foot Doug Wright catamaran that formerly ran as the Shadow Pirate boat — launched off of a wave on the front straight, barrel-rolled and came to rest upside down. In his first race out of his relatively short retirement, veteran offshore racer and multi-time world champion driver Nick Scafidi was unhurt. Throttleman Brad Wade also escaped injury, though the boat, which suffered extensive damage including a blow-out windshield, was not so fortunate.

Despite a slim, three-boat fleet, there was no shortage of competition in the Supercat ranks. John Tomlinson and Lorne Leibel of Canada Homes jumped out into an early lead down to the first turn. But by the time they made it out of the apex of the corner, M CON throttleman Tyler Miller and driver Myrick Coil began creeping up on Canada Homes’ transom. That order would remain for the rest of the race..

“This race could’ve been the other way around if we were on the outside, but they were right there pressuring us,” Tomlinson said. “We took a few really big flyers out there and I knew the other boats were coming, so I was just trying to loosen it up a tad to find one or two miles per hour more.”

WHM Motorsports remained distant behind the fellow Skater Powerboats catamarans of Canada Homes and M CON. For WHM, the issue was setup related.

“What we went in the water with is probably what we should’ve stuck with,” said throttleman Jay Muller, who share the cockpit with Billy Mauff, the team’s owner and driver.

Running on their own after making the switch to the Mercury Racing 860 power package and being voted out of the Supercat points system, SV Racing owner and throttleman Vinnie Diorio and his crew chief, Gary Swanson had a rough outing. (As previously reported on speedonthewater.com, Swanson took over the wheel from Canada-based driver and team co-owner Simon Prevost.) Diorio and Swanson were in for the most violet wreck of the day, a double barrel-roll on the front straight that landed their 39-foot Outerlimits Offshore Powerboats catamaran upside down.

“We were just trying to get out in some clean water and get away from the other guys,” Diorio said.

The uninjured SV Racing cockpit due emerged through the cat’s underside escape hatch as the rescue teams arrived on site. Their 39-footer drifted into the surf-line, which deposited the cat on the famed Cocoa Beach shore, where it rested for several minutes before being towed back out to sea.

Said Diorio, “The canopy did its job — it didn’t feel violent at all in there.”

Starting with the Supercat teams, the Class 1 Miss GEICO team briefly led the fleet off-course before quickly correcting. Throttleman Steve Curtis and driver Travis Pastrana checked out and remained ahead of its Class 1 competition — Lucas Oil SilverHook — for the rest of the entirety of the race.

“There were some big waves out there, but Steve kept things so level and balanced,” said Pastrana, an extreme motorsports great and second-year offshore racer who now has a rough-water race under his belt in the 47-foot Miss GEICO cat.

“That was the first time Travis and I have run reasonably hard in that kind of water and the boat ran flawlessly,” Curtis said. “When you’re given equipment like that, it’s easy to make yourself look good.”

Making her offshore racing debut in an MTI 390X running uncontested in the new 450R Factory Stock class, driver Taylor Scism, the daughter of MTI founder Randy Scism and his wife, Cherell, was joined in the cockpit by throttleman Shaun Torrente. The two-time defending F1 H2O tunnel-boat world champion, was subbing for throttleman John Tomlinson, who couldn’t be in two places at once as the Supercat and 450R Factory Stock classes started together.

Regardless, Scism was ecstatic after the event — and delighted with her teammate.

“Shaun did great in the boat on throttles and the boat handled the conditions so well — we were super happy with it,” she said. “I just can’t get over how wonderful the boat ran. Its running attitude was great.”

Sometimes a man of few words, Torrente kept it simple. “That 39 is a beast,” he said.

Though Taylor Scism and Shaun Torrente didn’t face competition in the new 450R Factory Stock class, they couldn’t have been happier with how their 39-foot MTI cat performed.

Editor’s note: All results are provisional pending confirmation. Bracket class results had not been released when this story went live. For complete results when they become available, visit the P1 Offshore and OPA websites.

Coleman McGowan is involved with marketing and communications for the Miss GEICO team, as well as a marketing advisor for the Nautical Network. This is his first article for speedonthewater.com.