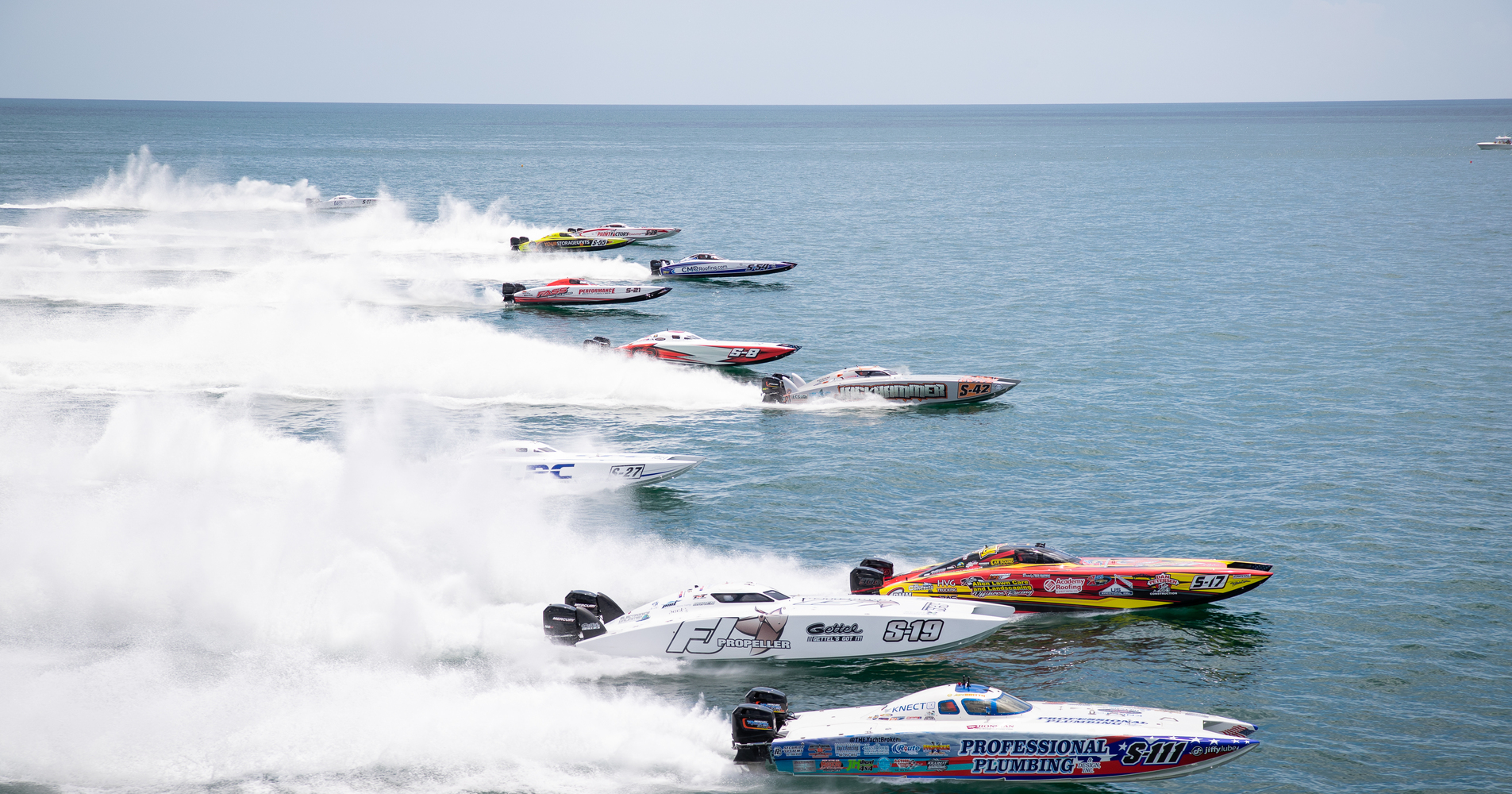 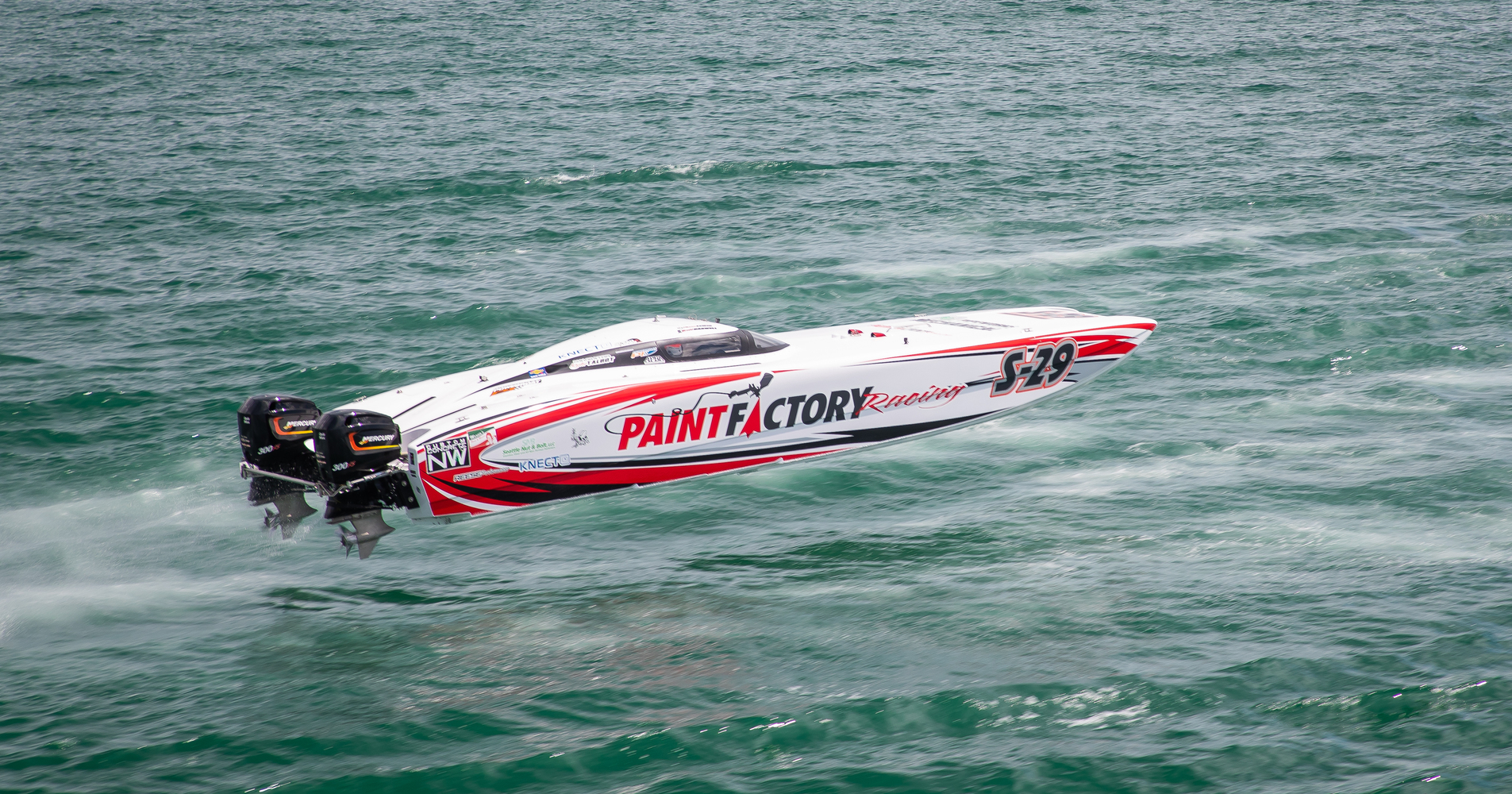 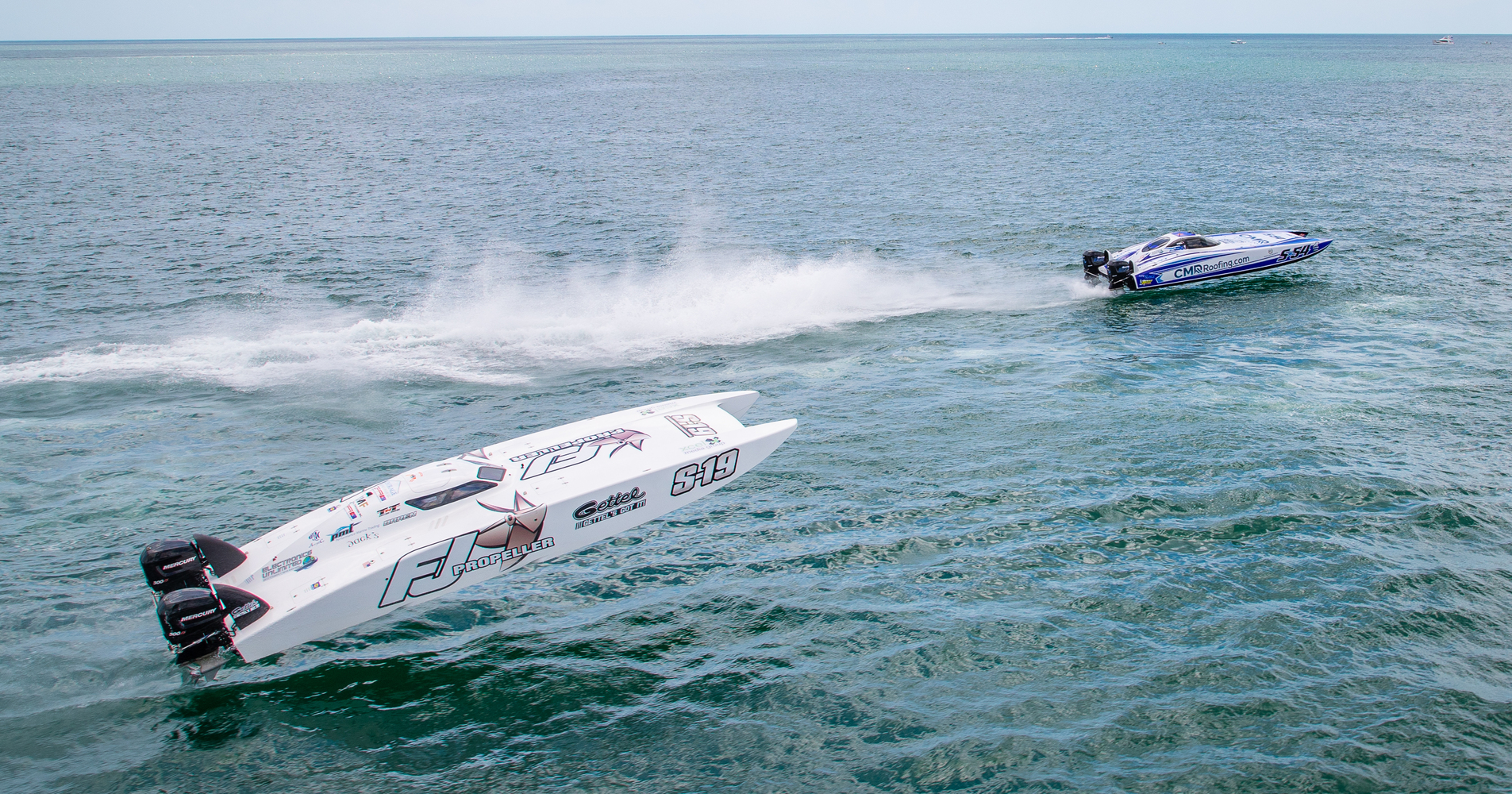 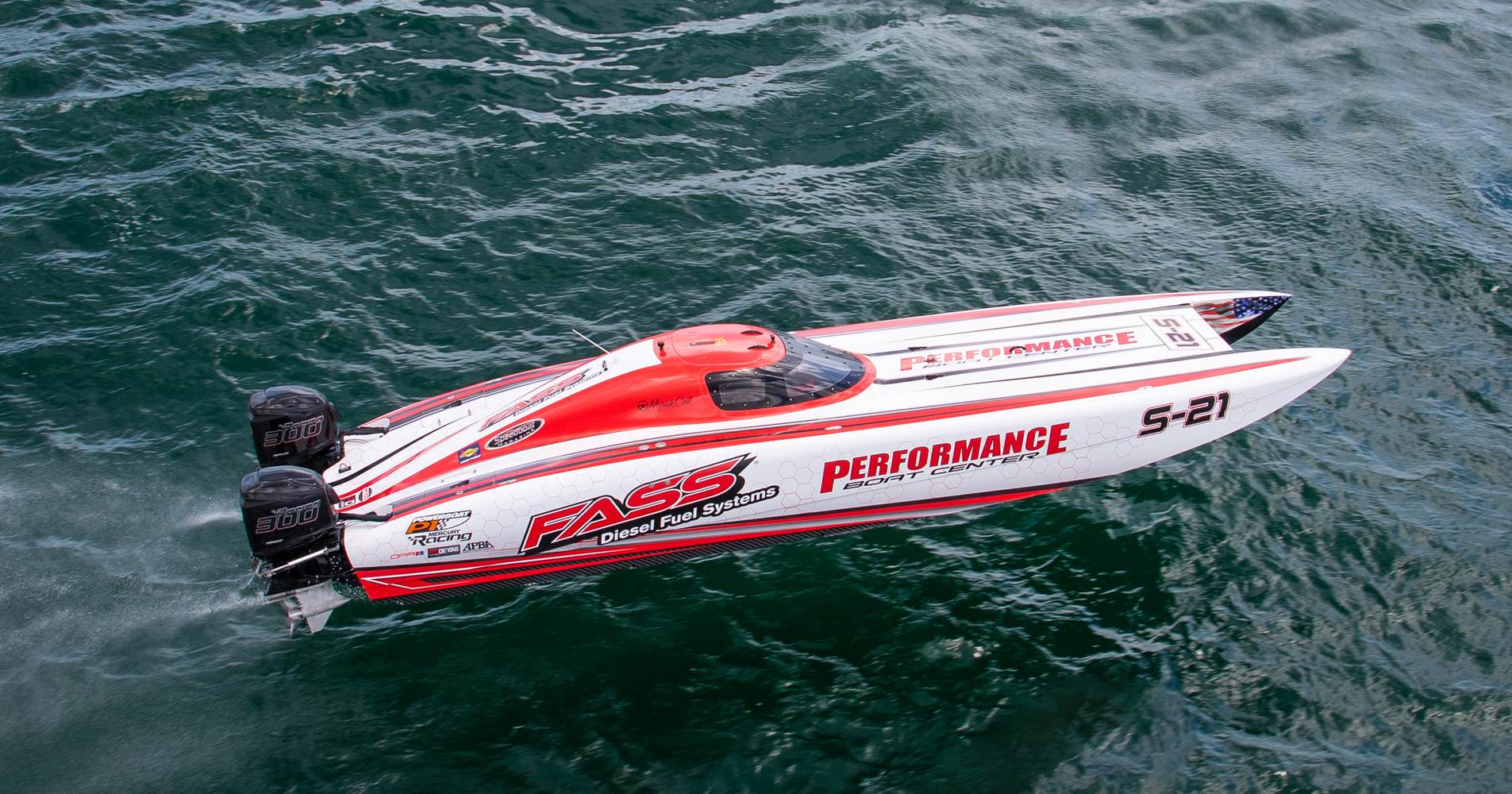 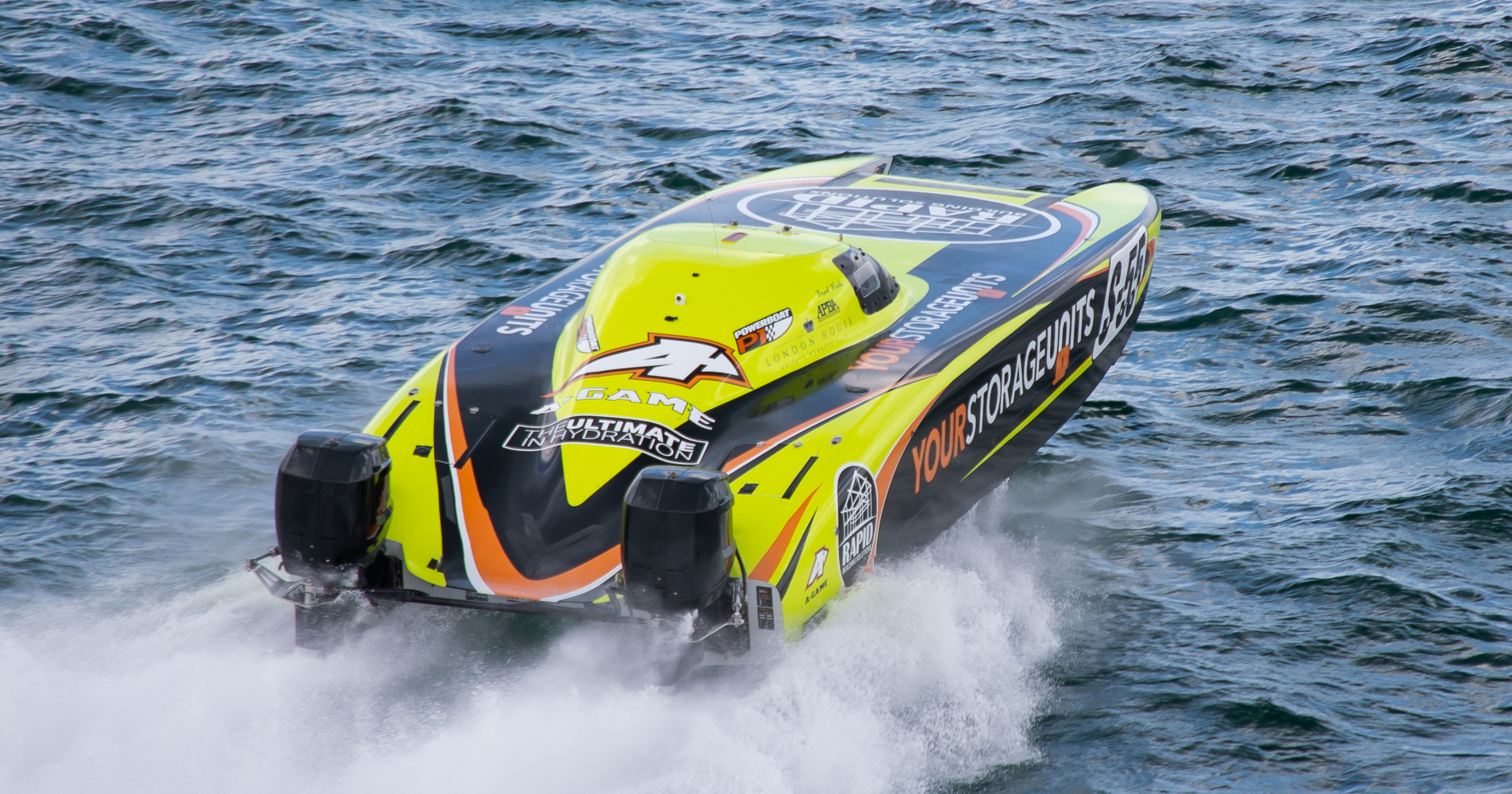 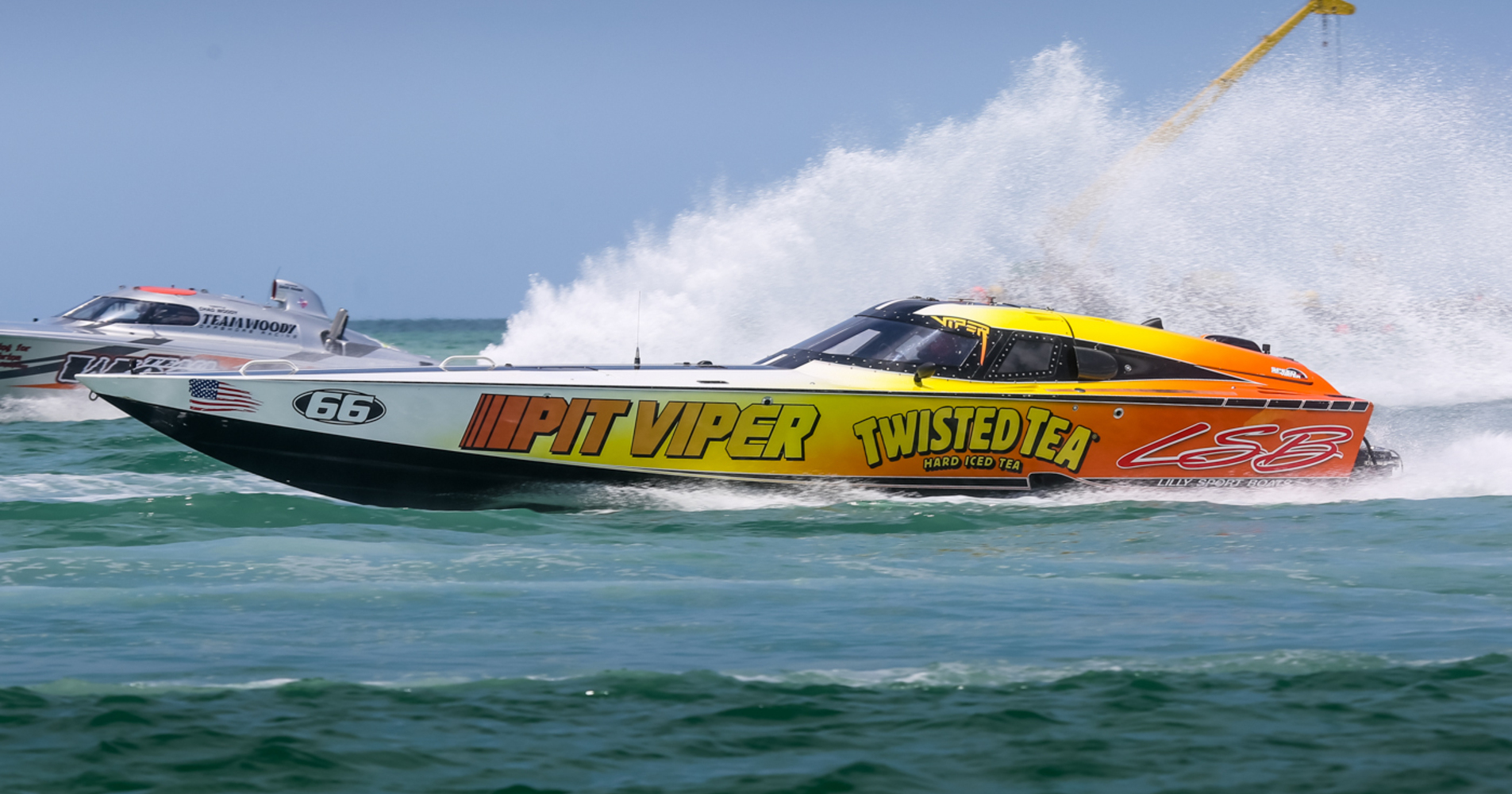 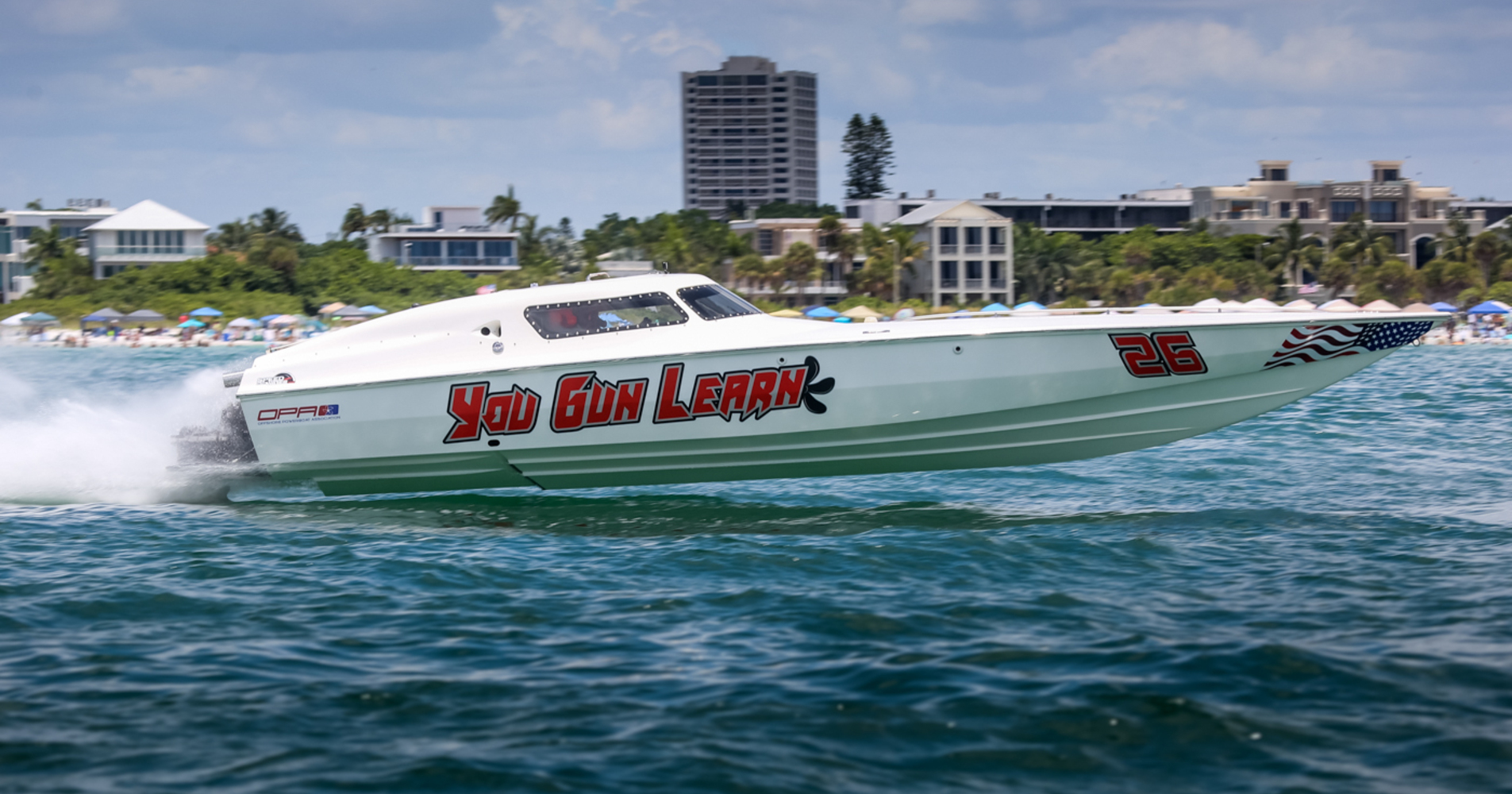 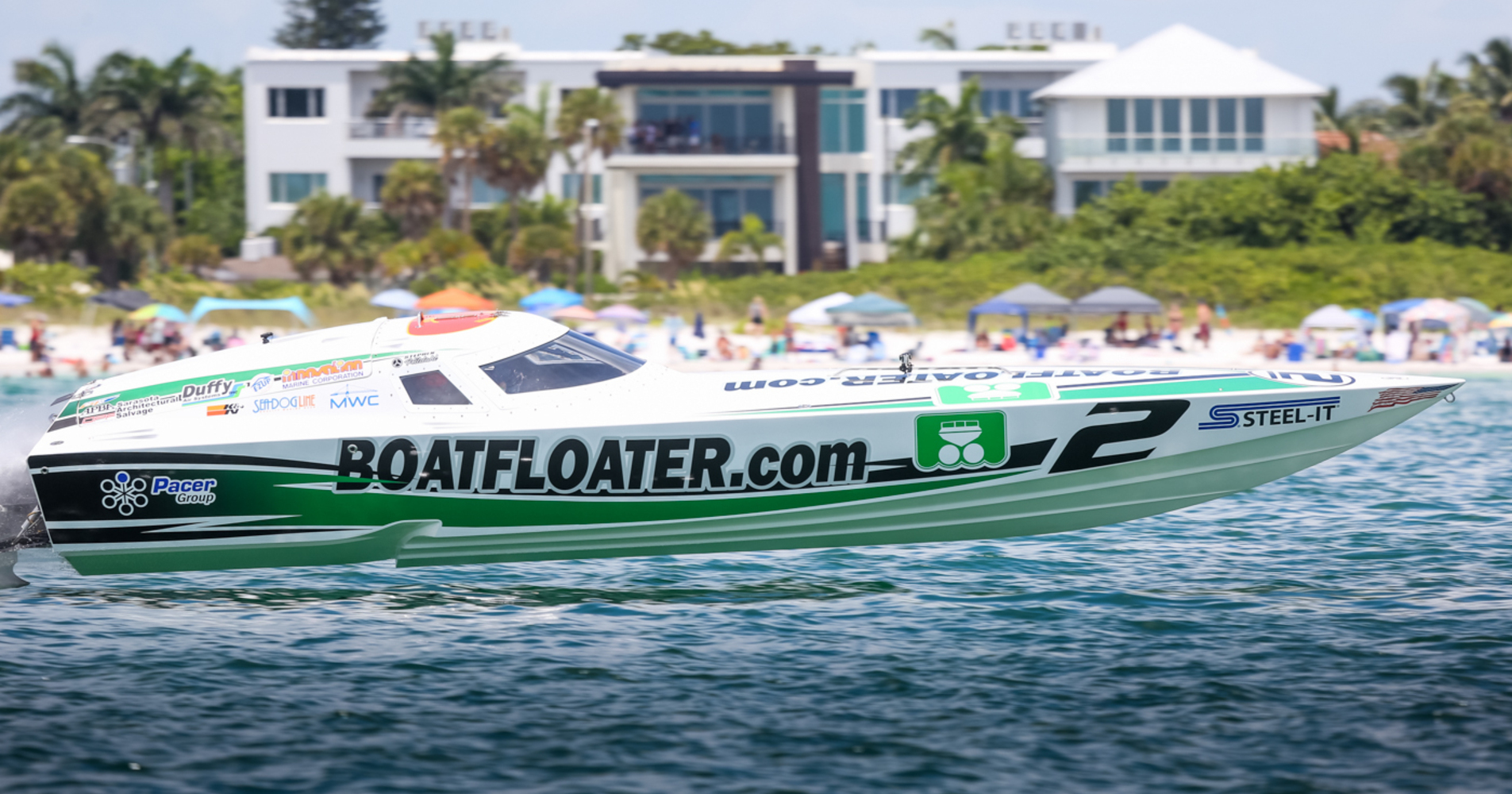 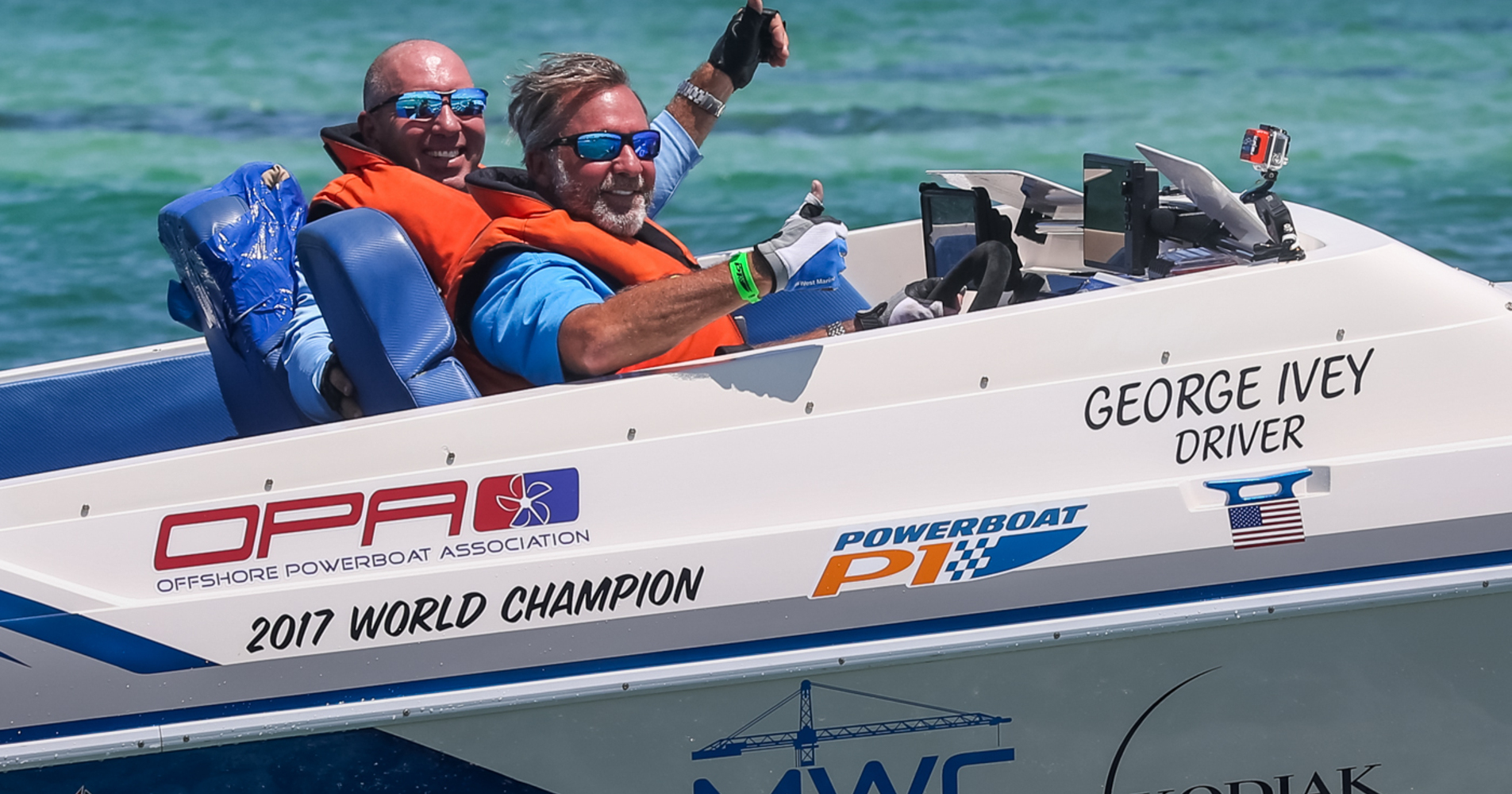 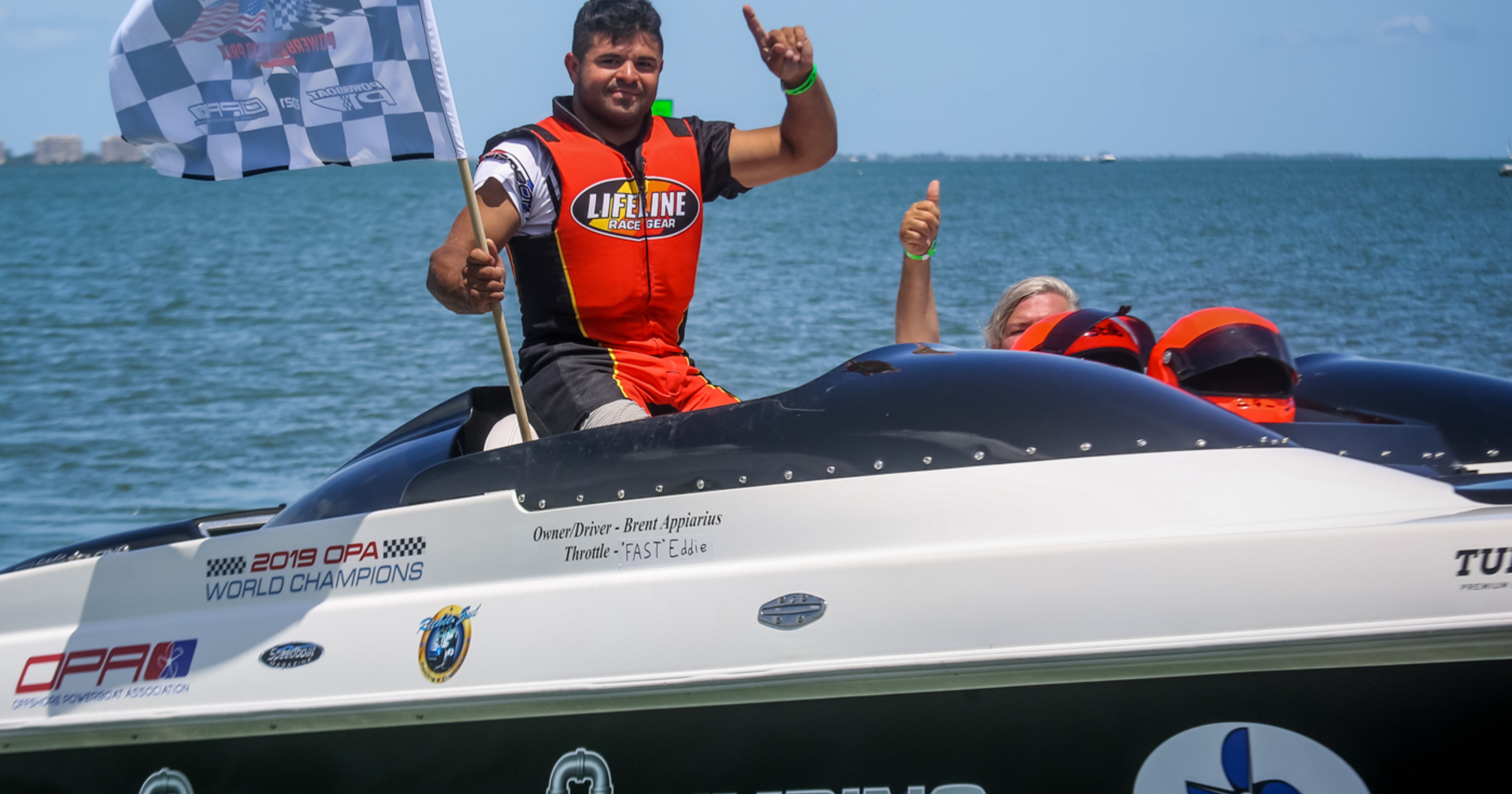 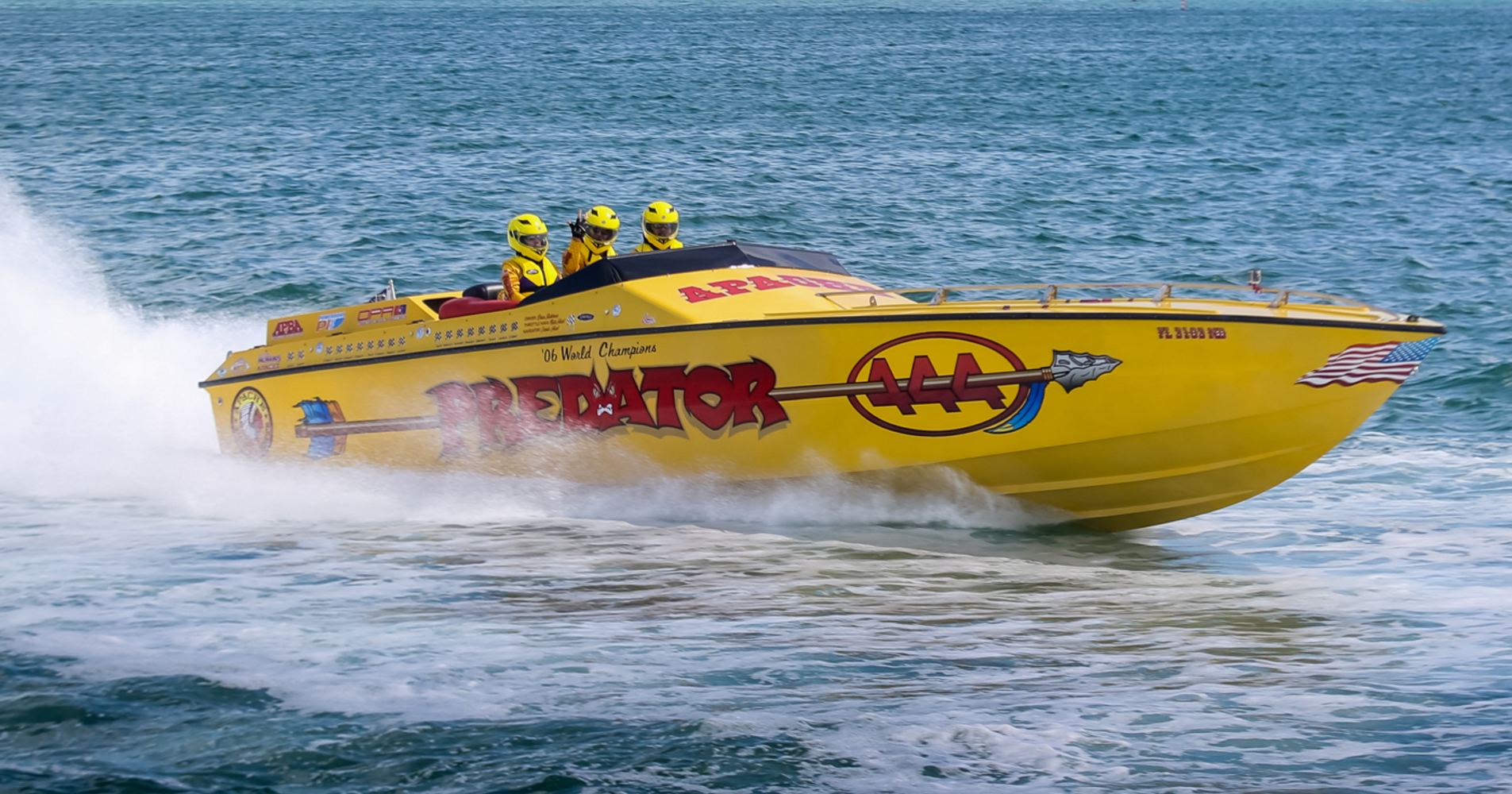 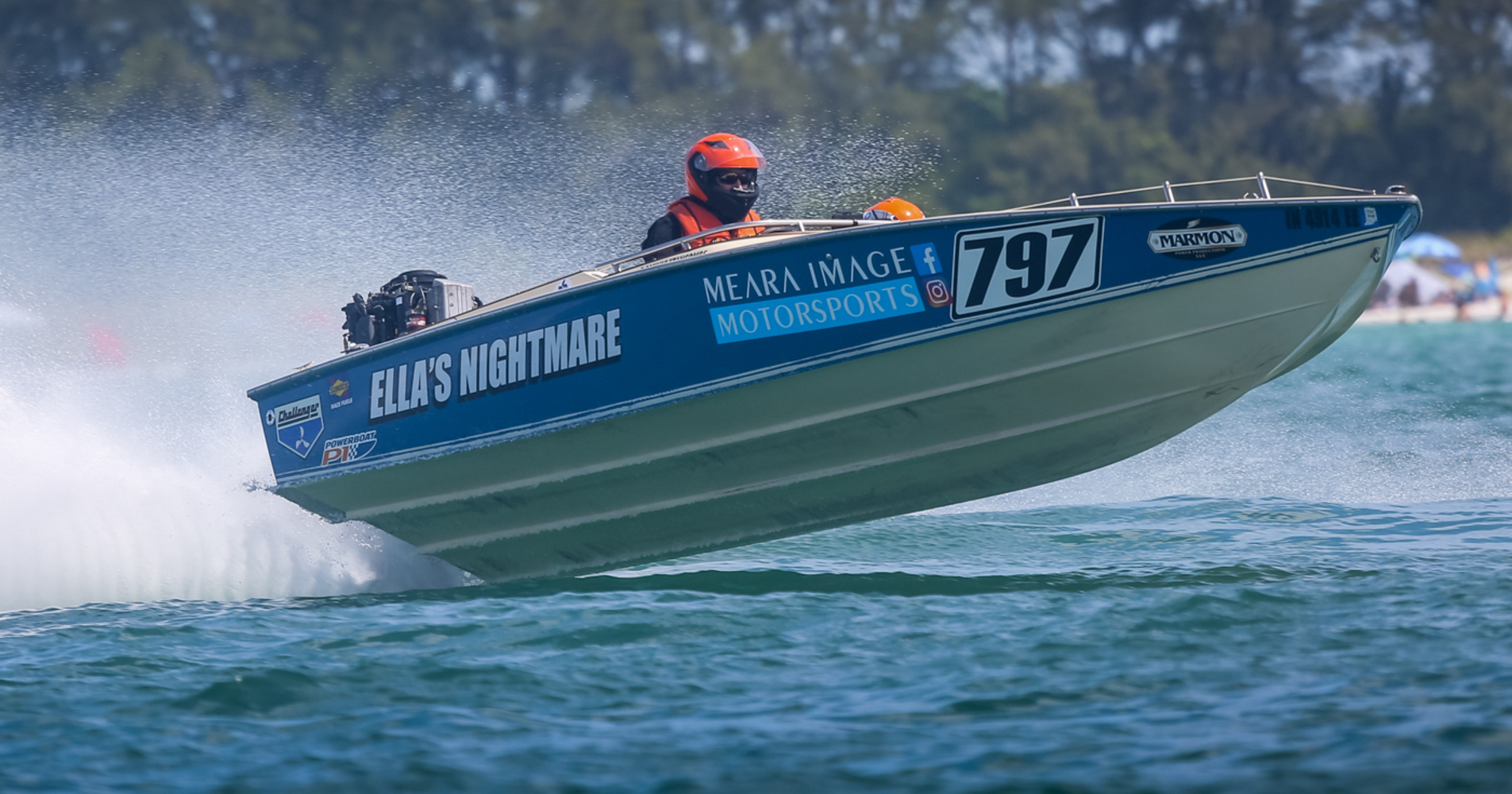 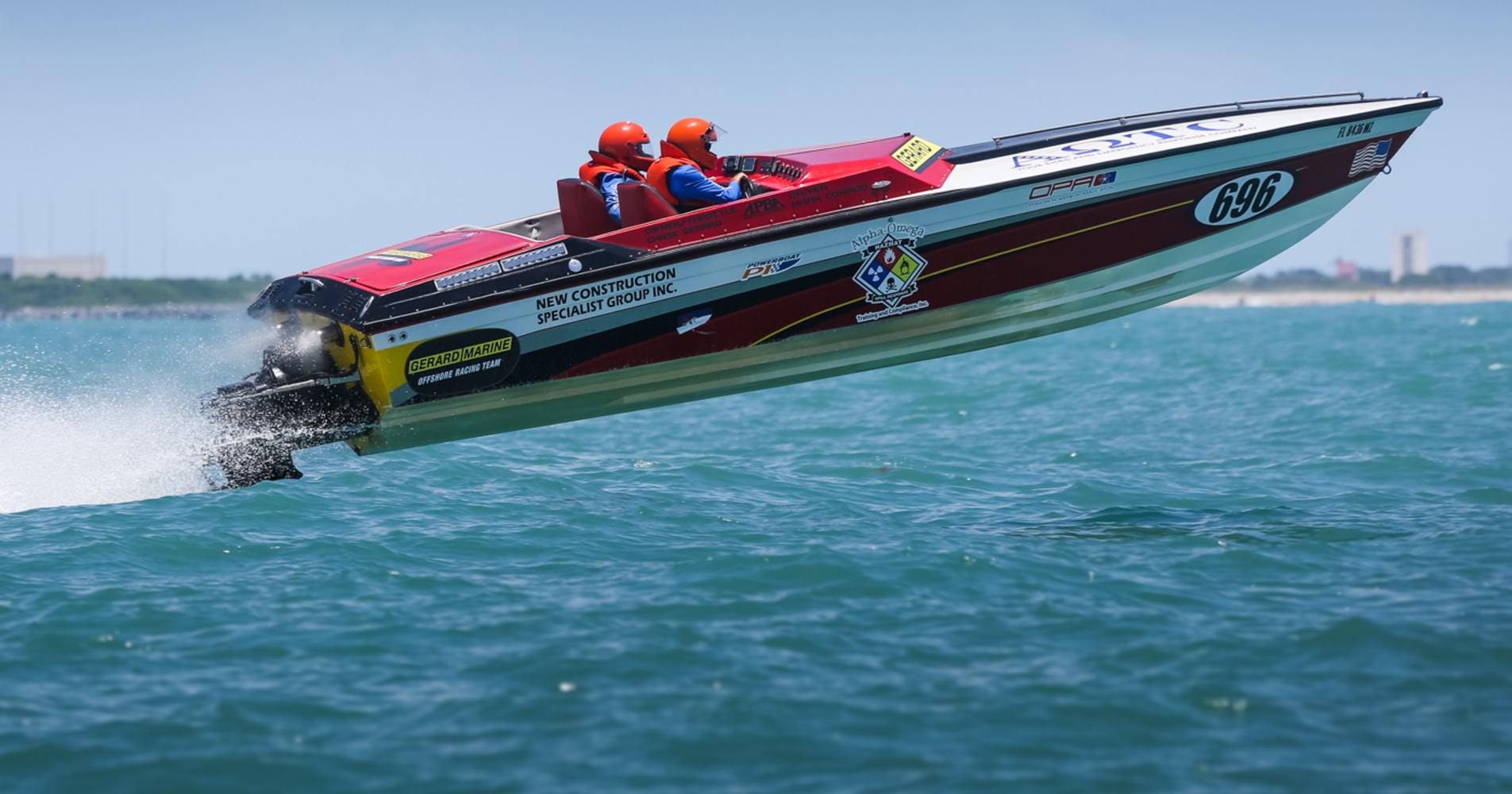 Highs and Lows in Sarasota

Written by Coleman McGowan Speed on the Water

The third of six races in the American Power Boat Association Offshore National Championship Series, yesterday’s Sarasota Powerboat Grand Prix saw some 60 teams descend with gratitude for their return - and high hopes for victory in their classes - to the Southwest Florida venue. Some, such as Super Stock-class first-place finishers Myrick Coil and Rusty Williams in the Performance Boat Center raceboat departed Sarasota satisfied with their results. Others, such as the entire Supercat class, never had the chance to run a lap.

Either way, it was long day for everyone involved.

Despite efforts made to get racing off to an earlier-than-usual start, the delays began as the course was being set.

“Unfortunately, there was low cloud cover where the marine mammal observation helicopter was coming from, so they were unable to take off on time to survey the course,” said Michelle Petro, the Powerboat P1 USA Championship manager, in a statement to speedonthewater.com. “We switched helicopters to get over the racecourse as soon as possible, Per permitting with the Florida Fishing and Wildlife Conservation Commission, the observation helicopter needs to be over the course for an hour before racing starts, to give the course clearance.”

Once the all-clear was issued, the first race began with Bracket Classes 400-700. In the 85-mph-limited 400 class, Team Predator, a 41-foot Apache manned by driver Dean Stahlman, throttleman Nate Hunt, and navigator Connie Hunt, led flag-to-flag, holding off Team Unleashed and Cigarette Justice League, by a significant margin. The last of the finishers, GNS Motorsports, crossed the line fourth, with Throttle Therapy, Control Freak and Burning Man all scored as DNR.

Micheal Stancombe and JJ Turk had a winning outing in their Bracket 500-class Team Woody raceboat.

The second race of the day featured the Stock-V class, and Mod-V class. Seconds after the green flag was raised on the Stock-V race, the Sunprint boat, throttled by Steve Miklos and driven by Steven Fehrmann, suffered a violent spinout on the charge to the first turn and was narrowly missed by the Visit St. Petersburg/151 Express boat. Miklos, whose helmet cracked in the incident, reported the cause of the incident as a failed steering line.

Shortly thereafter, the Mod-V Tiki Lee’s/Fastboys Racing boat launched off of a wave and stuffed into the next one, effectively submarining their 30-foot Phantom. The boat sustained catastrophic damage, including most of the deck being ripped from the hull and the cockpit canopy collapsing. Driver Ken Bolinger, who was transported to the hospital to receive treatment and reportedly suffered a broken femur, checked in with speedonthewater.com editor Matt Trulio this morning.

“Ken seems to be in good spirits and is grateful to have survived that accident,” Trulio said this morning via text message. “That was a bad one - I haven’t seen a V-bottom stuff quite like that since Ettore did it in Key West (Fla.) many years ago.”

On the race restart, Steve and Stephen Kildahl, the Sarasota-based father-and-son Stock-V team in Boatfloater.com, were quick off the line and held off challengers Sheriff Lobo and Visit St. Petersburg.

“We took advantage of the clean water and focused on making no mistakes,” said the younger Kildahl, who drives the team’s 29-foot Extreme raceboat. “Overall, it’s great to win in front of the hometown crowd.”

The Sarasota victory is the Boatfloater.com team’s third win in as many races in the 2021 APBA series.

The Bracket 700-class, father-and-son duo of Micheal and Dominic Stancombe had its first winning day in Ella’s Nightmare.

Making his debut as a throttleman in the Mod-V class, part-time Miss GEICO team driver Travis Pastrana crossed the line second with driver and longtime friend, Brit Lilly. But Pastrana and Lilly were awarded first place following a 30-second penalty assigned to the You Gun Learn team, which reportedly tested their boat outside of designated times and landed them in second place. Team Shocker of Chris Colson and Patrick Romero rounded out the Mod-V class podium in third.

In the deeply competitive Super Stock-class, Gary Ballough and Darren Kittredge of FJ Propeller led before being plagued by guardian mode issues with their Mercury Racing outboards. (Ballough reported an alternator being the trigger of the engine-protection system, which reduces power output to preserve the engines.) The Lake of the Ozarks-based Team Allen Lawn Care and Landscaping cockpit duo of Bill Allen and Cody McDowell moved into first place, but missed a turn buoy.

Ballough and Kittredge still had enough game to wage an all-out battle with CMR Racing’s Shaun Torrente and Eric Belisle, until the CMR crew eventually pulled away, finishing second.

“The water was bigger than it was on Saturday, so our setup and balance was not great,” Torrente said. “It was also our first time really running hard in offshore conditions, after retiring on the first lap in Cocoa Beach, so we’re pleased to have solid data acquisition from yesterday, which can inform our setup going forward.”

As they did throughout the entire APBA series in 2019, Myrick Coil and Rusty Williams of Performance Boat Center remained steady throughout the contest. And once again, consistency proved to be the ticket for the Lake of the Ozarks-based team, which earned first place after the final scoring was complete. The Paint Factory Racing team of Tanner Lewis and Brett Caswell finished third - their best result as a cockpit duo to date.

“The team and Rusty did a great job and our setup was great, though I felt badly for Team Allen,” said Coil, who in a turnabout from past seasons is driving the boat with Williams on the throttles. “I loved the large course from a driver’s standpoint, but I heard it was a little hard to see from the beach.”

In the biggest disappointment of the day, the fourth race was cancelled by the United States Coast Guard, according to Petro, thanks to threatening/dangerous weather.

“It was a matter of public safety, due to lightning strikes on and near the course,” she said.

That left the Supercat class, Class 1 and solo 450R Factory Stock classes without a race to run - and more than a few ruffled feathers.

“We’re very disappointed,” said Gary Stray, the crew chief for the Miss GEICO team, which is likely in its final season under the insurance giant banner. “We had a lot of people there to see the GEICO boat and from stuff that was out of our control they did not get to see it.

“Had the races started on time we would have been done long before the storm rolled in,” he continued. “In the Cocoa Beach season-opener, we raced extremely late - and you would let that go as it was a new thing for P1. But two in a row is a bit disappointing.”

Tyler Miller, the owner and driver of the Lake of the Ozarks-based M CON team, shared Stray’s disappointment but offered a more philosophical take.

“The cancellation of our race was very disappointing not only for all of the drivers and throttlemen but for the crews that worked so hard to transport, setup and prep for the,” he said. “Most of all, it was disappointing for the fans who turned out in the thousands on Lido Beach in beautiful Sarasota.

“That said, ‘disappointment’ in the circumstances Mother Nature handed the race officials is only a matter of speech,” he continued. “The safety of racers, race support and all the fans lining the beach - my own children and teammates included - is the utmost importance and should always be the number one priority when such a difficult decision has to be made. We live to race another day and we’ll be back in full force to take on Sarasota in 2022.”

The next race in the APBA Offshore National Championship Series is the St. Clair River Classic, July 31-August 1, in St. Clair, Mich.

Speed on the Water Results Sarasota