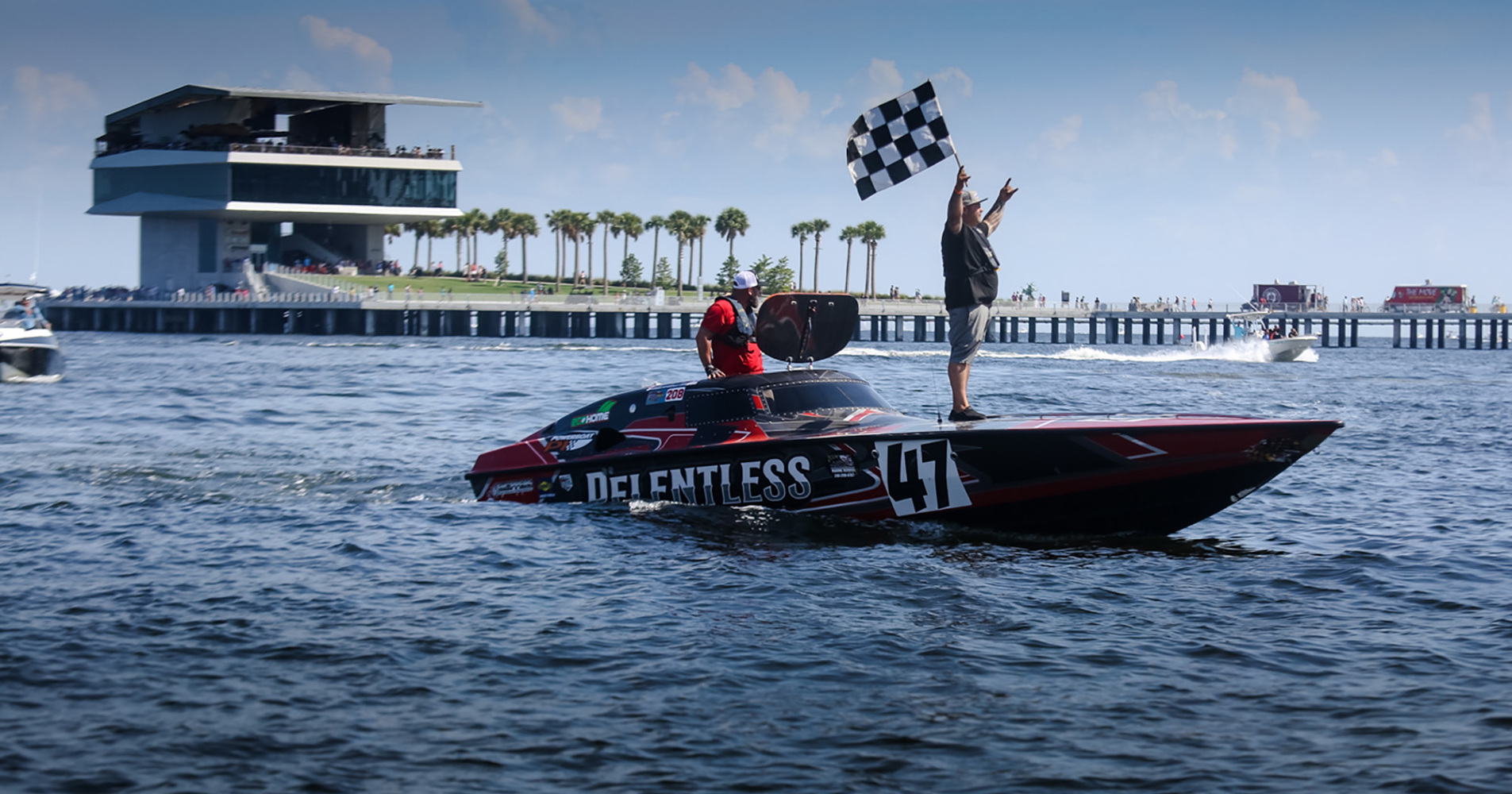 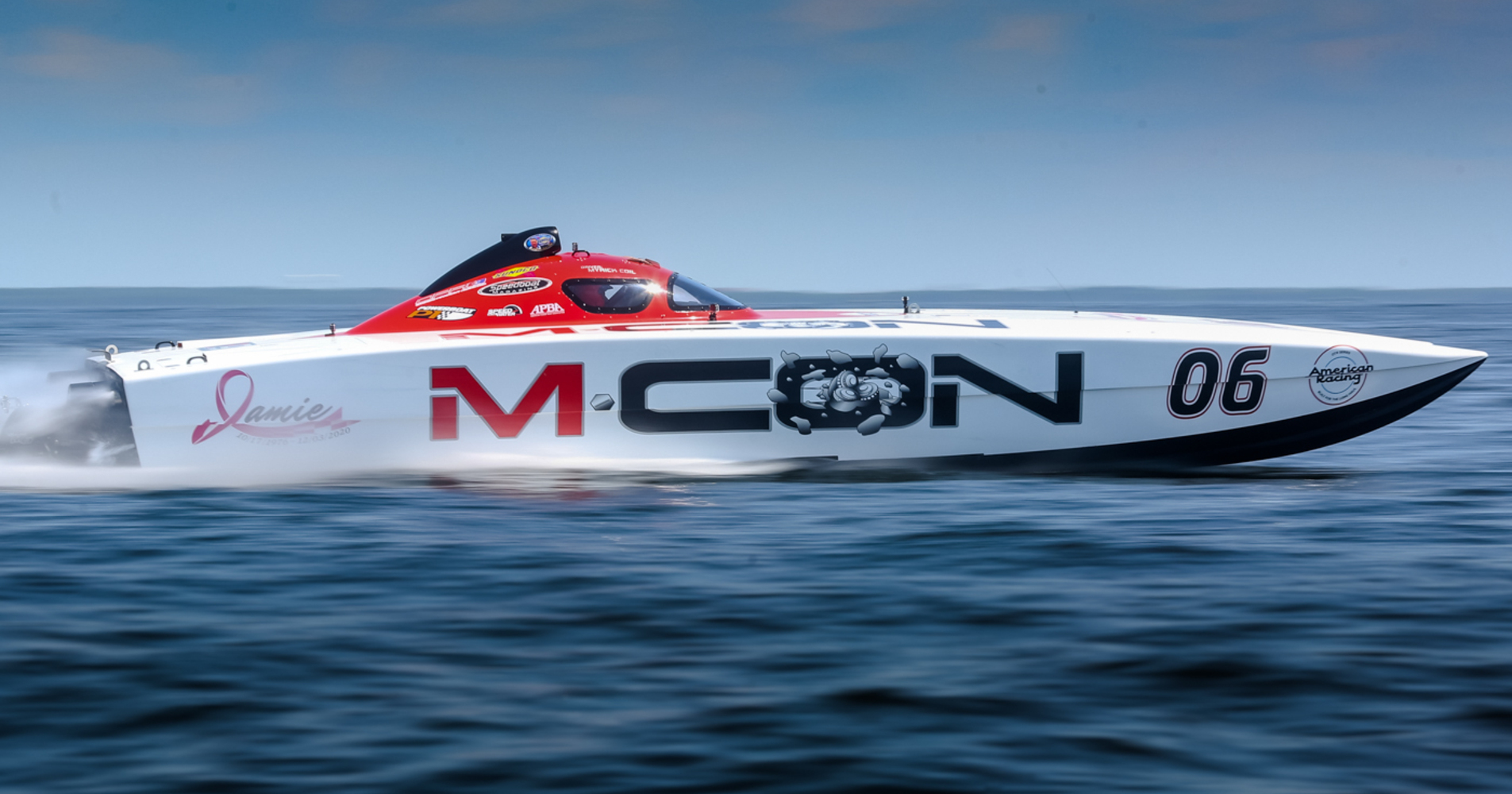 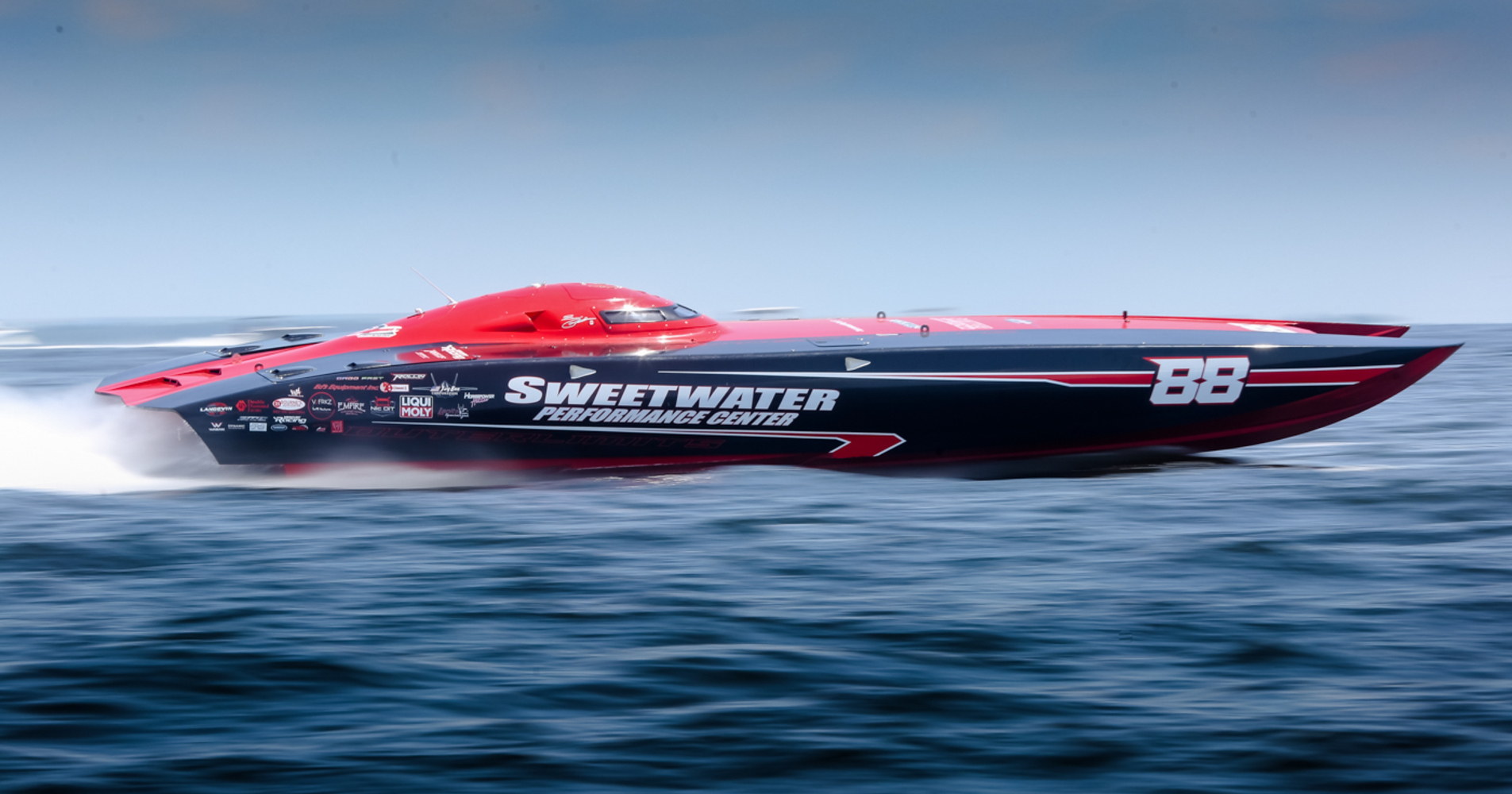 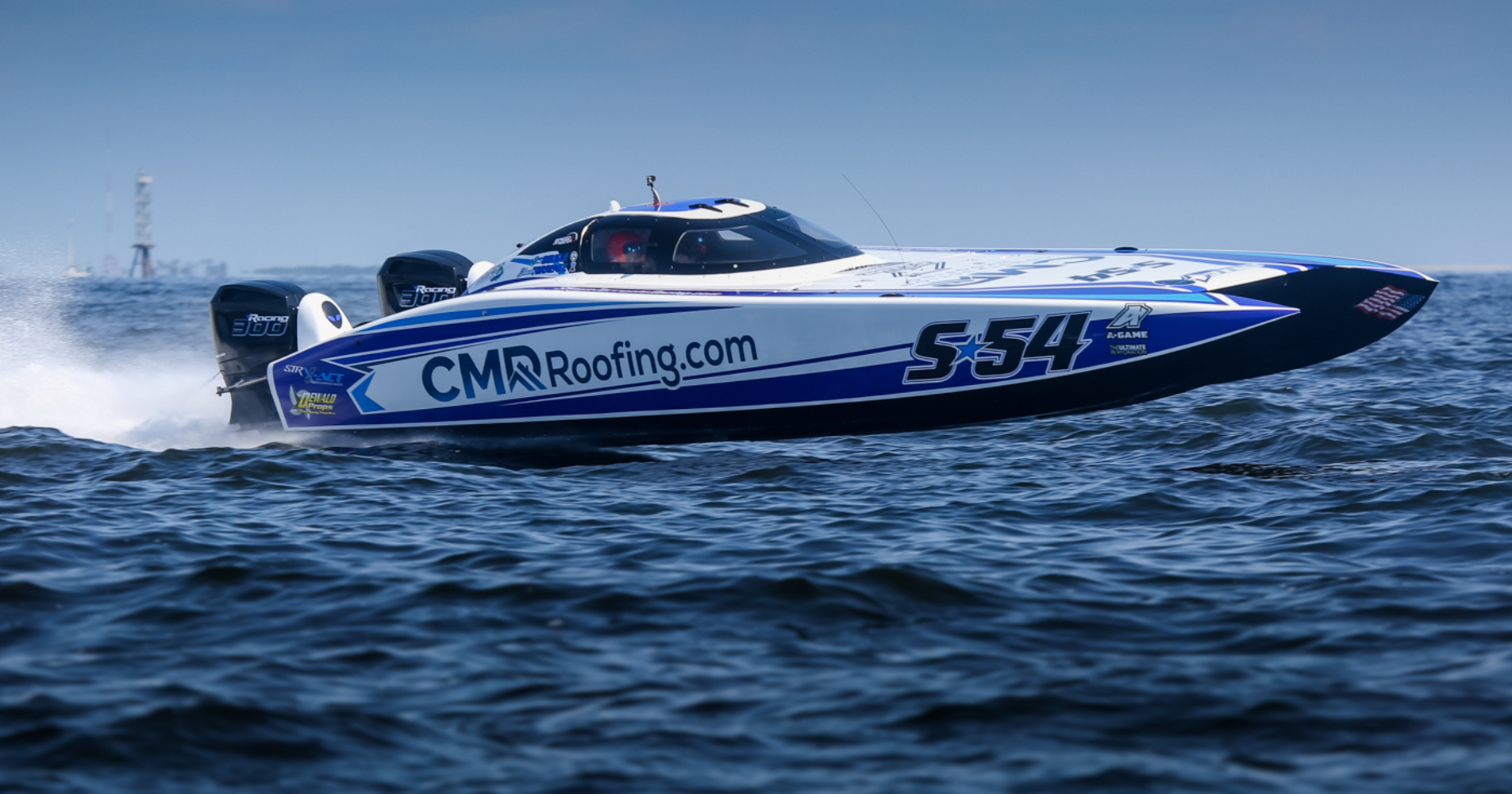 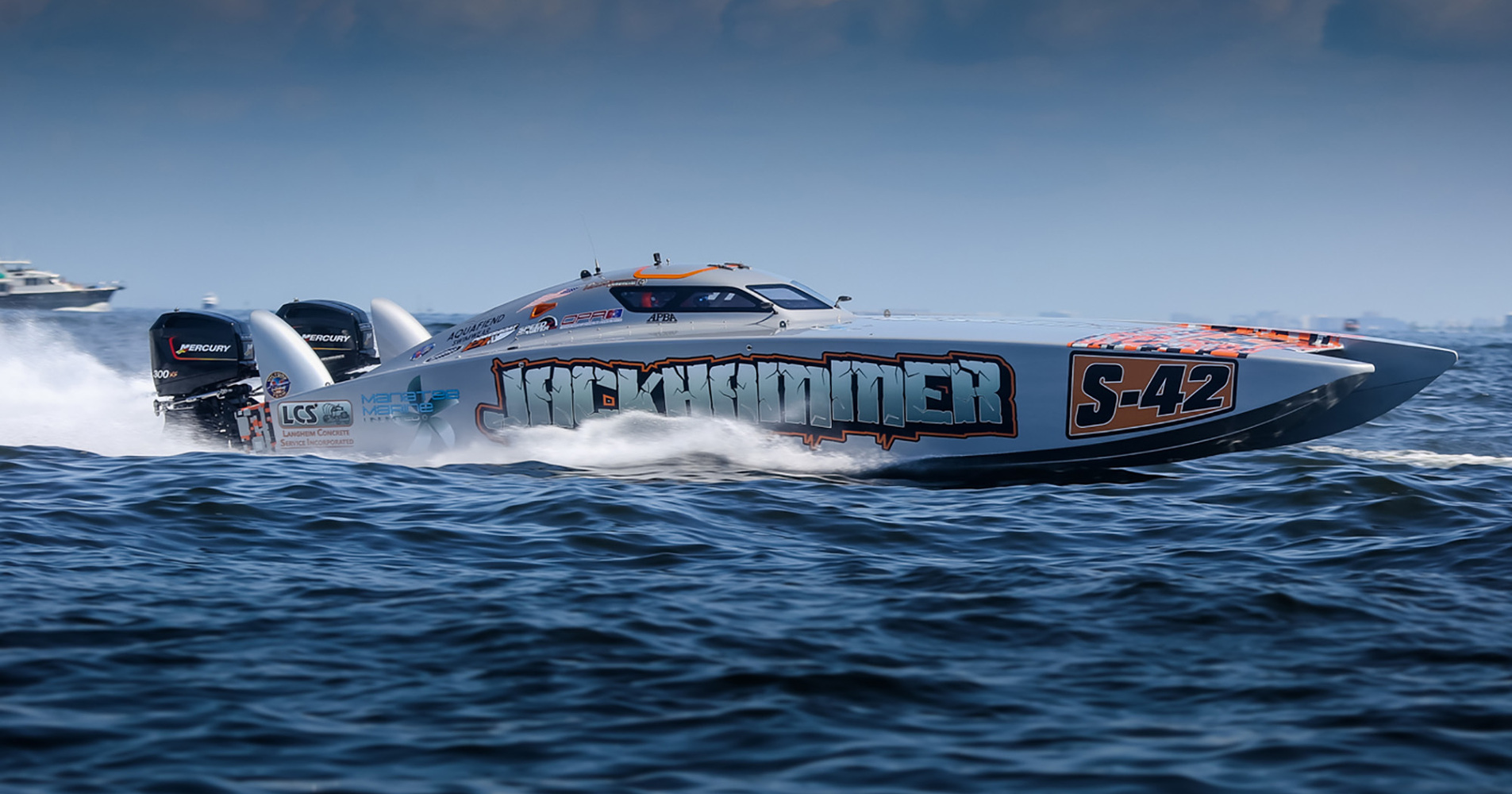 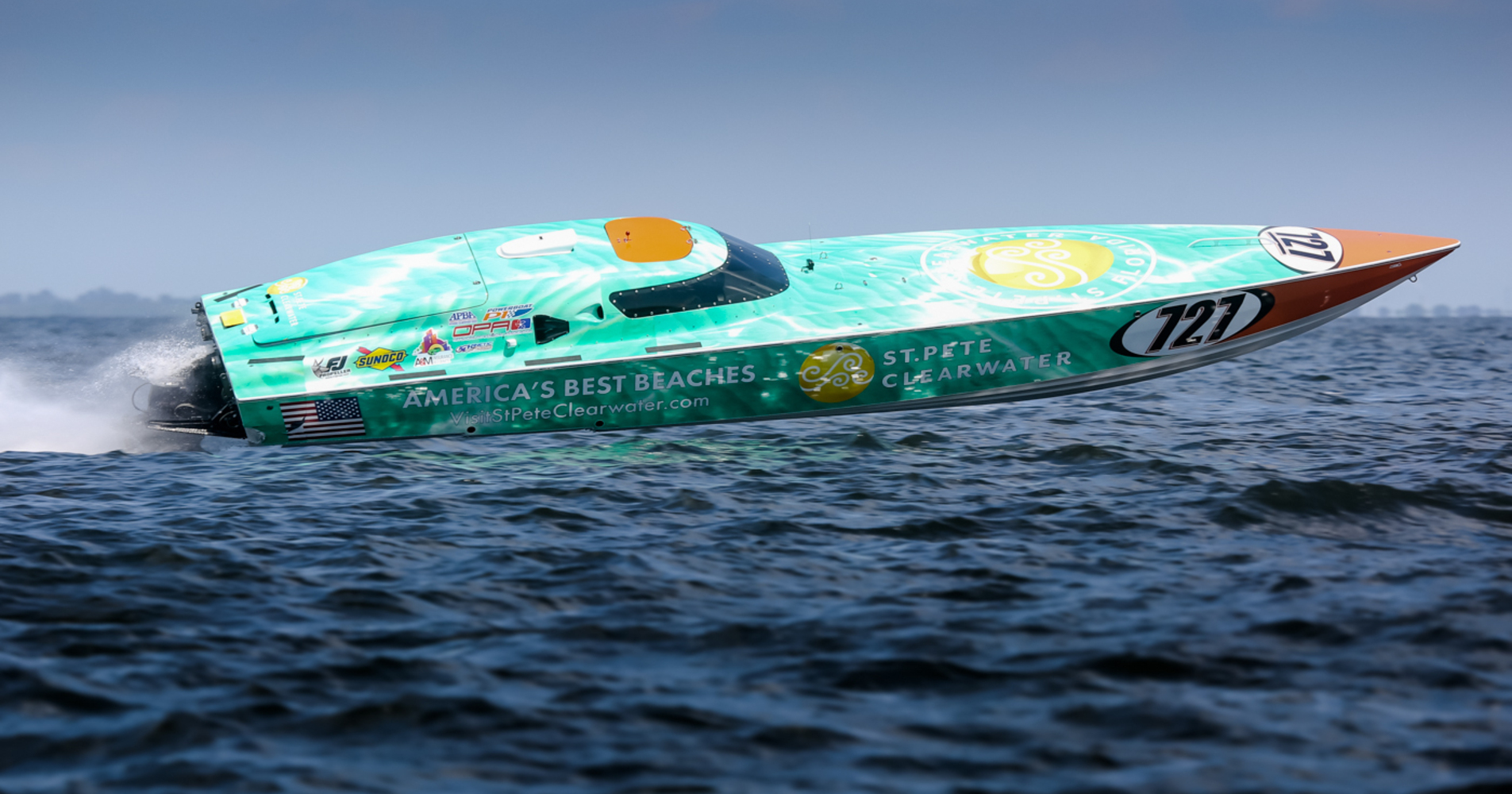 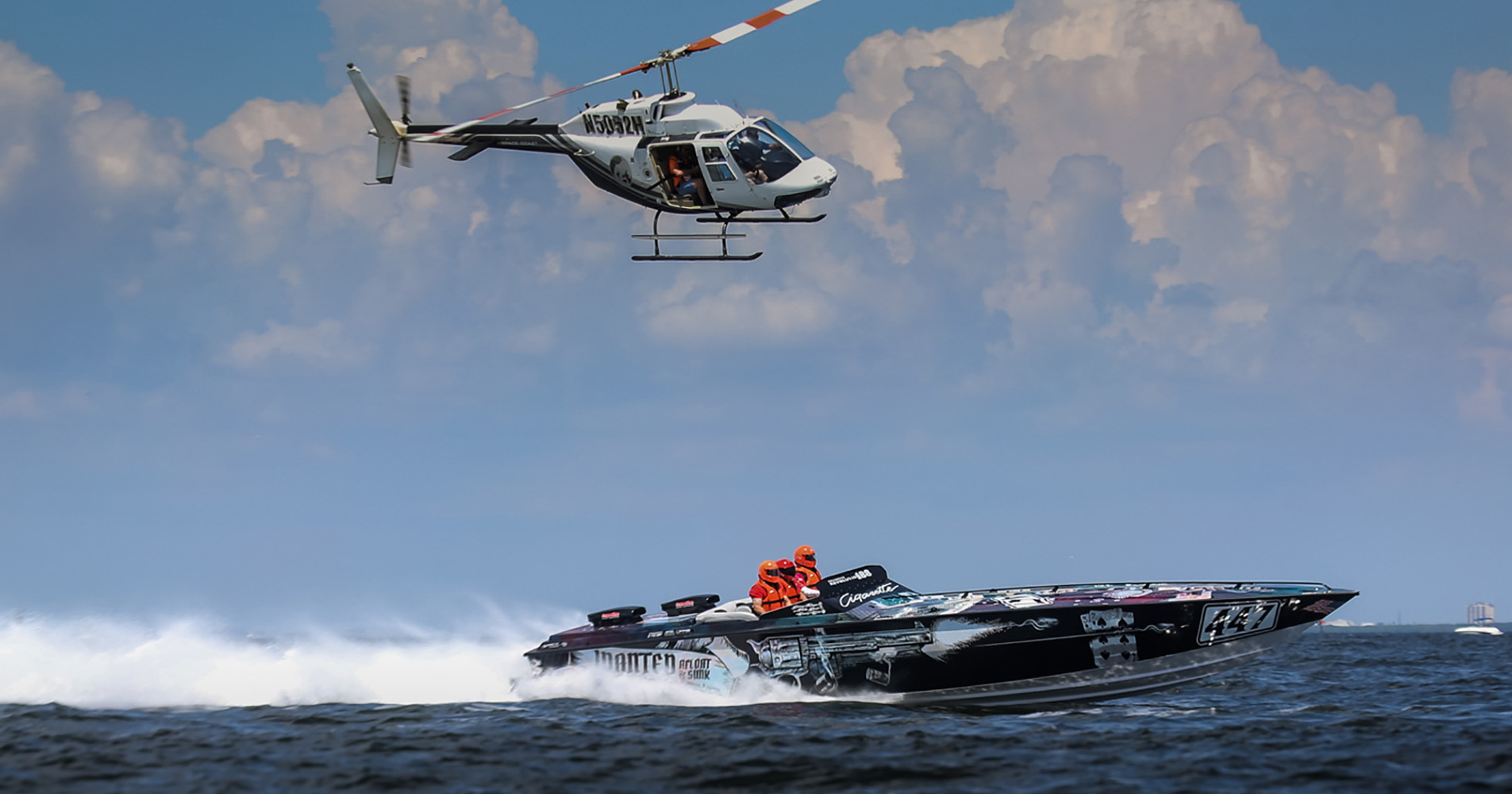 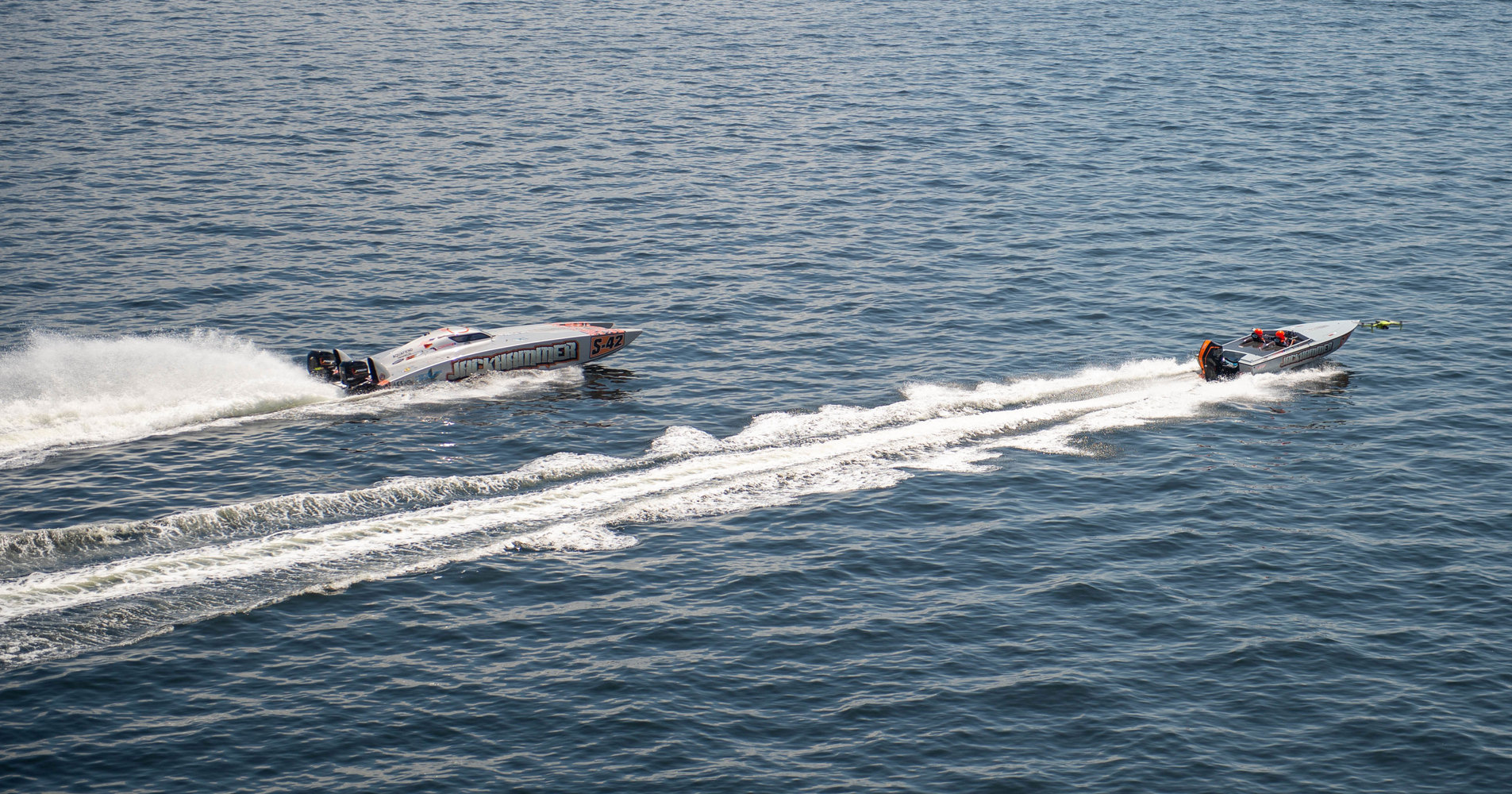 The Jackhammer Team with Greenlight TV Drone in Practice

With a one-foot chop and a gentle breeze, conditions were ideal for the cats at St Petersburg on Sunday. The vee hulls would probably have liked it rougher, but overall Tampa Bay offered up ideal conditions. The weather was matched by the great hospitality of the city of St. Petersburg, combining to produce a great day’s racing for all.

In a change to previous events this season, Powerboat P1 had decided to race the big boats first to avoid a repeat of Sarasota. At Sarasota, the Class 1, Super Cat and Factory 450R class boats had not raced due to a late afternoon thunderstorm. Such storms are also pretty common at this time of year in Tampa Bay; it was thought best to swap things around.

Super Cat racers Myrick Coil and Tyler Miller in #06 M-CON showed the rest of the field a clean pair of heels in the first race. M-CON finished ahead of the only Class 1 boat racing, #88 SV Offshore/Sweetwater. SV Offshore has larger engines than M-CON, but they are still dialling their boat back in after Cocoa Beach, where the boat flipped. However, M-CON’s victory was an impressive show of racing.

The Super Stock class was as competitive as usual, although not for first place. #S-54 CMR Roofing lead from the outset. The battle for second place was fought between #S-42 Jackhammer and #21 Performance Boat Center with #S-27 LPC Racing, #S-11 Wicked Powerboats and #S-17 Team Allen Lawncare playing catch up. Crossing the line at the end of 9 laps, CMR Roofing came in ahead of Performance Boat Center, followed by Jackhammer. Unfortunately, Jackhammer had hit a mark/buoy on one of their laps; this cost them a one-lap penalty and a fine, knocking them down into 8th place. Wicked Powerboats moved up to third place. The Jackhammer team’s run of bad luck was not over yet…

The Bracket 500 class had ten starters, equalling Super Stock for the biggest group of the day. #509 Shoreline Plumbing and #527 Team Woody/Golf n’ Gator are the top contenders for this season and were duelling from the start. Shoreline missed the dog-leg about three laps in and had to go round and play catch up. This meant they trailed Team Woody all the way, to cross the line in second place, followed by #517 Bulletproof/Glendale in third.

#327 Team Woody’s 300 Class boat wasn’t at St Pete. #350 Rollin’ Dirty Offshore/Elite Home Gamerooms is the only other 300 Class boat racing this season. Mechanical issues forced them to drop out in lap 4/5; they still qualify for 100 points to close the gap.

In the Mod-V, the young crew of Ian Morgan and Nick Imprescia in #727 Visit St Pete Clearwater/151 Express made a good showing until overtaken halfway through by #51 Sunprint. In doing so, Sunprint missed a buoy, so even though the race finished with them in first place, followed in by Visit St Pete Clearwater with #22 Punisher in third place, they picked up a 30-second penalty which dropped them into third.

32' Speedster, #499 Burning Man crossed the finish line ahead of the much larger 42’ Cigarette boat #7 Cigarette Justice League, but a 30-second penalty swapped their positions when the official results came out.

The last race allowed the Stock V, Bracket 600 and 700 classes, to show their stuff. #47 Relentless seemed to have an issue at the start and appeared to be heading for an early departure, but within the first lap, it powered back into contention. #V-1 Hurricane of Awesomeness/Rev-X Oil was well in the lead when it came to a pretty abrupt halt and had to retire, giving Relentless the lead, followed by #21 Shocker with new boys #11 The Firm/MSP Recovery Racing in Third.

During their first lap, the #744 Jackhammer boat, driven by Brian Guy and with Julian Maldonado at the throttles, began to pull up and was obviously taking on water. The Fast Response safety boat was on the scene pretty much immediately. It would appear that the boat was holed beneath the surface, possibly by impact with a submerged object. Social media footage from the Fast Response boat showed how close #744 was to completely sinking. It is a tribute to them bringing the boat back in.

The return of offshore racing to St.Petersburg for the first time since 2004 delivered outstanding sport and entertainment. St Pete Pier proved to be not only an exciting backdrop to the racing but a world-class location to enjoy the sport at close quarters.