After seeing success in the US, Powerboat P1 is keen to expand into the Middle East (Photo Ronny Mac)

Why Powerboat P1’s future is looking brighter than ever

Uncovering motorsport’s hidden treasure: Why Powerboat P1’s future is looking brighter than ever

This article reproduced by kind permission of SportsPro Media

The impact of the Covid-19 pandemic affected all areas of motorsport, and powerboat racing was no different. However, global marine motorsport promoter Powerboat P1 used the hiatus to focus on improving and expanding all areas of its business, including broadcast and digital reach, fan and partner engagement, and expanding its global footprint.
Insights

The marine motorsport industry is one of rapid growth and development, and this is being spearheaded by Powerboat P1, which since 2002 has helped bring more than 600 powerboat and jet ski races to 18 countries. Now, it has ambitions of becoming bigger and better than ever in the wake of the pandemic.

Following a challenging year due to Covid-19, which saw racing suspended in 2020, the global marine motorsport promoter has been taking several steps to ensure it is well prepared for life after the pandemic. Bringing on a new US chief executive to bolster operations, seeking new market expansion, broadening its broadcast reach and collaborating with major motorsport names like Travis Pastrana are just some of the ways in which Powerboat P1 is quickly developing heading into 2022.

SportsPro spoke with Powerboat P1 chief executive, Azam Rangoonwala, to learn more about the promoter’s plans for the future. The first hint of what that future might entail came in September, when Powerboat P1 brought on a new chief executive, Tim Ramsberger, to manage its US operations in a move designed to expand its global strategic planning.

“Bringing on Tim has been a process that we’re taking to establish the US as its own business entity because it really does have the power to do that,” explains Rangoonwala.

“Over the last two years, our focus has been on the US. Going into 2022, it gives us more of an opportunity to focus on our international and long-term strategy.

“It’s a key sign from P1 to say that we’re continuing to bolster our operation in general, but at the same time, investing in a property in the US that is already successful to take it to another level.”

In his new role, Ramsberger will help to improve the visibility of Powerboat P1’s properties across the US, focusing on making marine motorsport more attractive and accessible to a wider audience. That goal is one that aligns with the company’s plans to bolster its broadcast offering worldwide, especially in the US market.

“We went straight into America years ago and got some television contracts,” says Rangoonwala. “We have been working with Fox Sports’ regional networks, which is now Bally Sports. Over the last two years, we’ve gone to a national level of coverage with them, as well as CBS Sports Network. So across both of those, the exposure that we’ve been getting for the entire sport has put P1 into a really good light.”

Powerboat P1’s year-long hiatus in 2020 allowed Rangoonwala and his team to evaluate their broadcast coverage and develop a strategy to grow it even further. The marine motorsport promoter has secured a five-year agreement with the American Power Boat Association (APBA) to film and distribute its offshore events globally. There is also a focus on live streaming coverage of all race classes on Facebook and YouTube to ensure Powerboat P1’s series reach the widest possible audience and remain accessible. In addition, Powerboat P1 produces a one-hour television highlights show that is broadcast both in the US and internationally.

“As the social media and digital side of things have progressed, they’ve become more and more of an avenue for people to engage with our series,” says Rangoonwala. “What we’ve done is we’ve started using that content on the one-hour show, to then generate additional content and push that out there.

“The television side, from an international perspective, has been really beneficial for some of the US partners that we have that are looking to get exposure in other parts of the world. So just purely from a US perspective, that’s been extremely valuable.

“Then, from a streaming perspective, we were initially streaming just via Facebook. So we would stream an event live via Facebook, and we’ve been improving that over the years. This year, we have incorporated streaming via YouTube and via Facebook, live on both at the same time. With YouTube, just from a standpoint of being able to get it onto your TV, ease of use, and more people being familiar with it has really proved to be successful for us.

“We’ve also been constantly improving it. We started putting in little segments, trying to do a bit of behind-the-scenes coverage to put in between the races. So there’s also lots of little segments within the live stream. It’s been really good for us, and it’s been a lot of fun.”

Through a combination of broadcast deals and digital exposure, Powerboat P1’s series have the potential to reach 230 million homes across key markets such as the UK and western Europe, Australia, Singapore, Japan, the Philippines, Russia, South Africa, Egypt, Thailand, Malaysia, the Middle East and South America.

After seeing success in the US, Powerboat P1 is keen to expand into the Middle East

As motorsport at large continues to rapidly grow in the Middle East, Powerboat P1 has unsurprisingly identified the region as a key market for international expansion.

“We really want to get out to the Middle East,” Rangoonwala declares. “There’s obviously a lot of activity in the region. There's race teams, there’s racing that’s happening out there. I think that there’s a really good opportunity for us as a business between the powerboat side of things, and the AquaX and jet ski side of things, to really include the eastern side of the world under our programme.

“If you look at the US, we can take what we’ve done in America and expand it internationally.”

What Travis has done is open people’s eyes to this sport – not only from a racing perspective, but from a global perspective of what can be done commercially with it.
Azam Rangoonwala
Chief Executive, Powerboat P1

Some of those growth ambitions have been supported by a name that will be familiar to motorsport enthusiasts. With the help of well-known driver and stunt performer Travis Pastrana, Powerboat P1 has been able to reach a variety of new audiences. First collaborating with the global marine motorsport promoter in 2019, Pastrana has since been welcomed back to host offshore invitational events, introducing a range of motorsport fans and action sport names to powerboat racing, including Kurt Busch, Conor Daly, Brian Deegan and Ricky Johnson.

“He has brought a different dynamic that the sport hasn’t had in a while,” explains Rangoonwala. “Historically the sport has always had influencers, so I think what Travis has done is open people’s eyes to this sport – not only from a racing perspective, but from a global perspective of what can be done commercially with it. 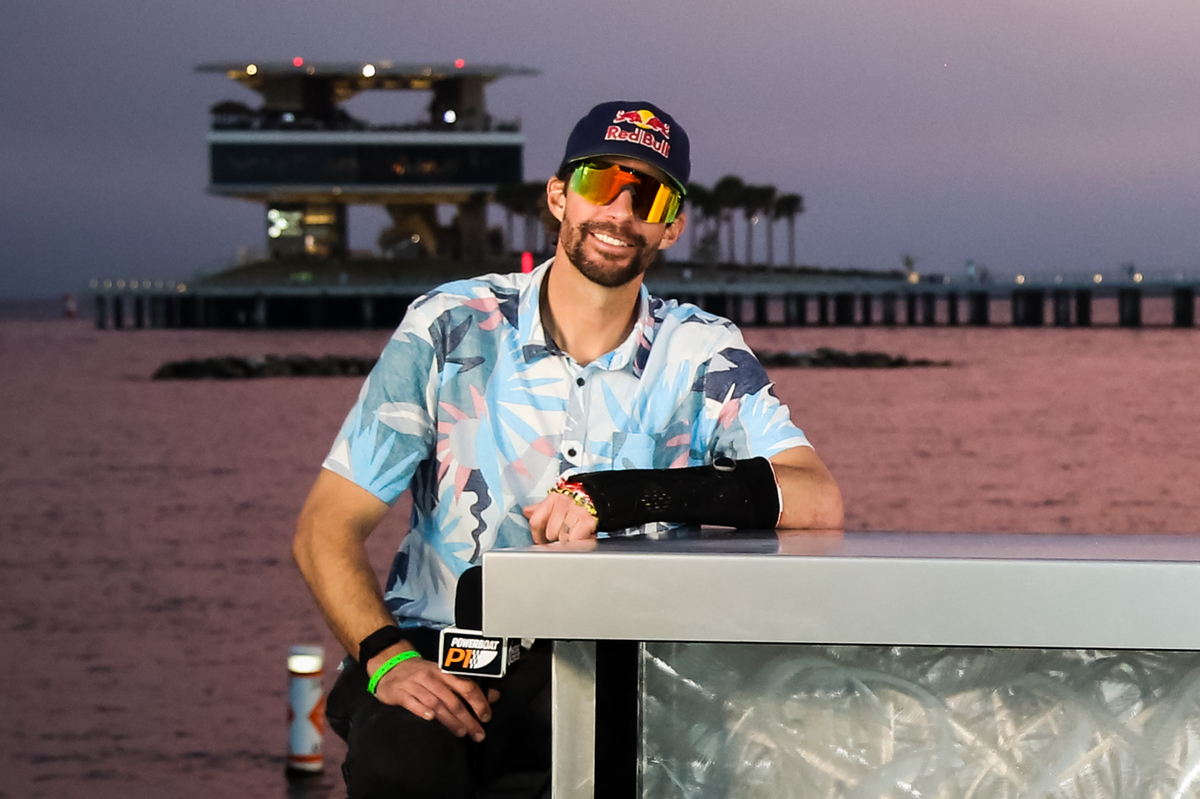 “So across all fronts it’s has been great for us. Commercially, in talking to various sponsors and partners, it’s a great thing to be able to mention that he’s involved in the sport, so we hope that we can continue the relationship with them.”

In the past, Powerboat P1 has typically reached an older demographic, but with increased investment into broadcast and streaming, as well as the promoter’s collaboration with Pastrana, Rangoonwala reveals that engagement with younger audiences is on the up.

“On the powerboat side, the demographic is a bit older, so about 35 to 55 and even older, so a bit of an ageing demographic,” he says.

“But we are seeing more engagement with a younger audience. AquaX is really engaging for the younger audience, and the demographic of AquaX in general is younger, just purely in terms of the participation.

“Going into the offshore side of things, I think that’s where Travis and some of the other motorsport guys coming in, they are working hard to look at that demographic and reach it. So we’re in line with that and continuing to push on that side of things.”

One way Powerboat P1 is seeking to grow its following is by shining more of a light on its racers, thereby crafting fandoms for powerboat racing’s competitors and driving engagement among a wide range of audiences.

“We’re really looking at building the characters with our sport,” Rangoonwala notes. “That’s definitely something for us going into next year. People love to engage with the boats, and the boats have followings. But now it’s trying to open audiences’ eyes to who’s inside the boat.”

While engaging with younger audiences will remain a focus, Rangoonwala is eager to continue to improve Powerboat P1’s hospitality offering to serve those attendees who prefer a more premium experience and are keen to network at the events.

“On the hospitality and the partnership side of things,” Rangoonwala continues, “the demographic of the offshore powerboats being a higher net worth individual is very attractive for some of our partners. So we’re looking to do B2B in the hospitality areas which has been quite successful over the last year.”

With the widespread availability of the Covid-19 vaccine and concrete plans in place to continue growing, the future is looking ever brighter for Powerboat P1 and the marine motorsport industry. The promoter is focusing on how to build on previous success and make its events even better for both spectators attending in person and those engaging remotely online. Despite the fact that racing was brought to a halt in 2020, it’s clear that Rangoonwala and his team took the opportunity to reflect on how they could improve their series, bring powerboat racing to a wider audience, add value for partners and expand globally.

“A good thing about the pandemic is that it let us analyse where Powerboat P1 was,” explains Rangoonwala.

“So, going into 2021, we thought let’s focus on how we can build up our events. Expanding our footprint and increasing the fan experience is something that we want to elevate in the years to come.”